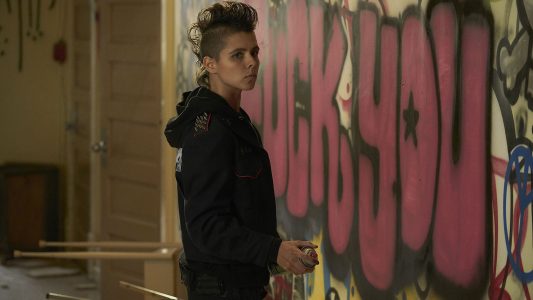 “It all started with a weird black gut rot.” 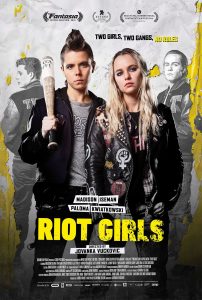 After all the adults are wiped out from a mysterious disease, the surviving kids split into two groups: the have not Eastsiders vs. the tyrannical Westside Titans. When one of their own is captured by the Titans, it’s up to punk rockers and best friends Nat and Scratch to lead the East side teens on a deadly, high-octane mission that forever alters the future of Potter’s Bluff.

In Riot Girls, the production team consisted of a group almost entirely female. Out of it comes an infect film, but one that puts women in the foreground. The proof that women are capable of making shits that are almost the same as men’s. Except that the heroes are girls and the poor princess to save is a boy…

Written, produced, directed, etc. by women. It is clear that this kind of team makes a film different from what we are used seeing. Right? Well, apart from the fact that they are queer girls, one of whom is rather asexual, and that the person to save is a guy, nothing… No, Riot Girl, unlike a film like Endzeit (also composed of a team almost entirely female), brings nothing new under the sun. In fact, it looks like a mix between Twilight and any Rambo action movie.

A few weeks ago, I saw This Changes Everything, a film that advocates for women to take more space in the cinema. Another film rather bad, by the way. Would it not be possible to offer these places to women who have something to bring to the cinema rather than women who only want to make the same films as their compatriots of the opposite sex? Anyway, Jovanka Vuckovic has managed to prove that women, too, are capable of creating lousy and worthless works.

Is Riot Girls an assumed cheap movie? If so, it does not look like it. Beyond the cheap side, we find all the clichés of the classic action movie. But the roles of heroes are reversed.

The “bad guys” Titans are idiots, without depth, and cliché thoroughly. Obviously, they are men, them… I say that like that. From the beginning, we hate them, find them stupid and know that they will lose this fight. Besides, we also know how the film will end after a few minutes.

Let’s go back to our queer heroines without flavor. There is Nat, the beautiful blonde, a little naive, but sexy, and follower. She is courageous, but remains the Rambo’s sidekick of the movie, Scratch. Scratch is the badass of the film. She does not care about rules. She has a big gun. She has iron balls. Oops… I mean a metal uterus. She will blow up the heads (literally). At the same time, what can we expect when the producer, Lauren Grant, declares this about the movie: “It is exactly the kind of project I want to see and make – a queer coming of age film set in a post-apocalyptic landscape. Kick ass female characters getting their turn to be the heroes of their own stories.”

Oh yes… I can’t ignore one last little point… Was it really necessary to make these characters queer? And to make one of the two characters a girl who could be defined as non-binary? I know, it’s in the air. I guess it helps to get funding. This is the kind of thing that gives me a little martinist side (Richard Martineau – it pisses me off and makes me whine).

Still, there is a small positive point in this film. The little comic strip side. At first, they present the characters as if it was a comic. We see the boxes. The images are drawings. There are bubbles for the texts. And a music that scream. All the film during, the concept of the boxes remains present. That I liked.

Oh yes… I could mention that these queer characters participate in the story, without their sexual orientation being an issue in the story. That’s really good. Finally!

In the introduction of the film, that is shown in comics, we are told that adults have disappeared due to a strange illness that makes them rot. Then, we do not really hear about it except once, when we see one of the bad guys who seems to have this disease that appears slowly. Finally, this strange disease is only an excuse to place 10-year-old characters, dressed as a 55-year-old adults. And so that these children can do anything. And it’s really anything.

But we have a movie made by girls, with girls. What a beautiful way to show that women and men are actually capable of the same things. Here, create shit!