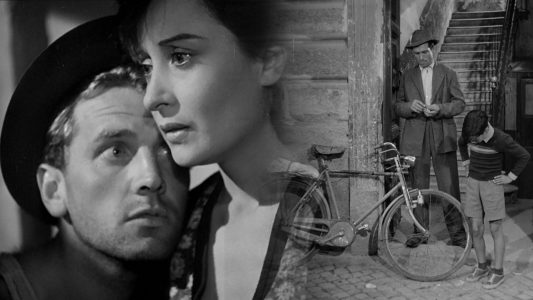 This movement originating in Italy in the aftermath of World War II was a response to the golden images propelled by Mussolini’s cinematic influence, which depicted a polished and embellished portrait of Italy before the fall of its fascist regime. Neorealist works portray the lives of the people as they are. It is for this reason, as well as because of the lack of technical and financial means in the context of defeat and occupation, that directors resorted to filming in the streets and using the people they found there as actors. This component gives a documentary-like aspect to the works of this period, hence the notion of realism. The difficult working conditions, the harshness of human life after the war and the testimonies of the Resistance are central themes of this movement.

Luchino Visconti’s Ossessione is the film that gave neorealism its impetus in 1942. While the central theme is not the war or the Italian defeat, it still portrays the misfortunes and daily life of ordinary people. The work was initially condemned by the Fascist authorities and presented in its shortened version before its greatness was recognized. The director followed up with other great neorealist feature films and continued to impress in the following decades.

One cannot speak of Italian neorealism without mentioning Roberto Rossellini, who gave us Roma città aperta in 1945. An emblematic film of the liberation of Rome, a sense of truth emanates from this work. This essence is also found in Paisà (1946), another film by Rossellini. Through various episodes, it encapsulates the period of exaltation, disorder, horror and hysteria that followed the war. The lucid vision of the director serves as a window on his time. In 1948, Germania anno zero was released, in which the surrender of Germany and its consequences for the German people are brought to the fore.

One of the great names of Italian neorealism made his mark in 1944 with I bambini ci guardano. Vittorio De Sica followed this up with several poignant films of the movement: Sciuscià (1946), Ladri di biciclette (1948), Miracolo a Milano (1951), Umberto D. (1952). This prolific director won several major awards for his work.