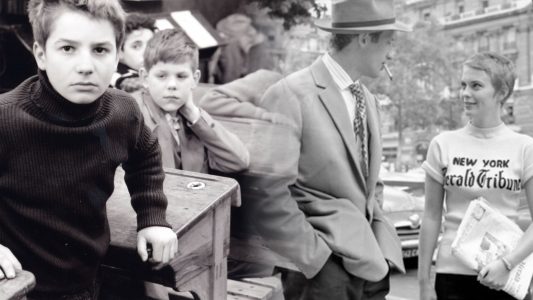 In the early 1950s, France turned away from classical cinema to make way for a cinema that mirrored the times and reflected its immediacy: the New Wave. This name was used to represent the arrival on the scene of a multitude of new authors, artists and directors, ready to renew the seventh art. Most of them regularly collaborated with the magazine Cahiers du cinéma. Set in the historical context of the Trente Glorieuses, the works shed light on social movements, such as women’s liberation and student revolts.

However, the theme of war and the devastation it caused is never too far off, remaining in the shadow of the people who lived through it. It was in 1959 that Hiroshima mon amour was released, a smashing success for Alain Renais and Marguerite Duras.

That same year, the film Quatre Cents Coups by François Truffaut was released, starring the character of Antoine Doinel, played by Jean-Pierre Léaud. The saga of Antoine Doinel consists of five films. The work is characterized by its particular sequence of shots, which gives the impression that the author is talking to the audience directly. This is partly true, since this work is inspired by Truffaut’s childhood as well as by his thesis, which conceives of directors primarily as authors.

The new wave of authors also brings new faces among the actors, many of whom are revealed by the pioneering films of this cinematic trend. This is notably the case of Gérard Blain and Jean-Claude Brialy. They will go on to be the headliners of the works that will solidify Claude Chabrol’s role in the New Wave: Le Beau Serge and Les Cousins.

Jean-Luc Godard gives us À bout de souffle in 1960. Underneath its American-style “whodunit” allure, the feature film stands out for its capacity to capture the zeitgeist, whether in its choice of actors or in the way it captures images. Other notable films of the movement include Jacques Rivette’s Paris nous appartient, Éric Rohmer’s Le Signe du Lion, Godard’s Pierrot le Fou and Le Mépris, and Truffaut’s Jules et Jim.

Although the New Wave ran out of steam in France in 1962, it inspired the next generation of filmmakers in the rest of the world and fuelled other similar movements for the rest of the 1960s.