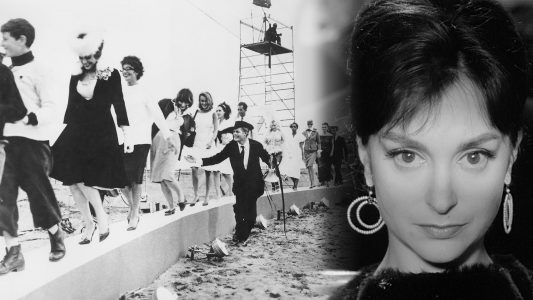 The Golden Age of Italian Cinema

The Italian film industry experienced an unprecedented boom from the 1960s to the 1980s, so much so that Rome was called “Hollywood on the Tiber.” This nickname is due to the fact that the Cinecittà production studios were less expensive than those of its American counterpart. These studios were at the heart of the golden age of Italian filmmaking, which took place at a pivotal time: the end of neorealism, the economic boom, and changing social mores, including student movements and activism.

Director Federico Fellini contributed greatly to the glory of the movement with La Dolce Vita (1959). The ending of the film depicts a lonely hero, as well as an open ending, which came to be Fellini’s trademark. This marked a break with the traditional narrative, but still earned the work many awards and prestige. In 1962, Otto e mezzo premiered, a film with autobiographical tendencies and a baroque style. It is the director’s last black and white film. The list of his outstanding works would not be complete without Roma (1972) and Casanova (1976), in which the director’s cynicism is well established. Much of Fellini’s work was shot at Cinecittà, one of whose buildings now bears his name.

A leading figure in neorealism, Luchino Visconti entered the 1960s with refinement, poetry and aestheticism. Civilization and human life are the focus of several of his feature films. His worldwide success grew with Il Gattopardo (1962), Sandra (1965) and Lo Straniero (1967), inspired by the eponymous book by Camus. He is the creator of a historical tetralogy whose themes are decay, death, unattainable beauty and loneliness. These titles, La Caduta degli Dei, Morte a Venezia and Ludwig, depict the tragic fate of its characters and are among Visconti’s last works.

Within the golden age of Italian cinema, let us not forget the Italian comedy, a genre that does not prevent the dissemination of deep underlying messages about society and national values. Films worthy of mention include Divorzio all’italiana by Pietro Germi (1961) or La ciociara (1960) and Matrimonio all’italiana by Vittorio De Sica (1962).