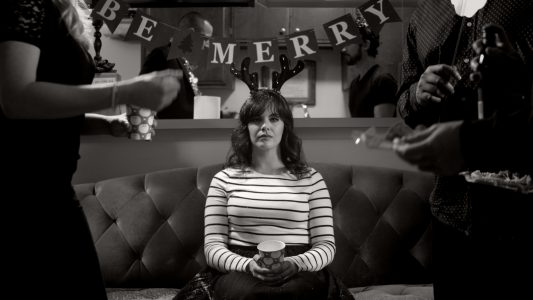 “Life is a cigarette. It begins with light and ends in ash.”

During the first holiday season after her beloved father’s passing, a young woman attempts to recreate their traditions with his cremated remains.

With Joyeux Noel, Haley Webb creates a light film, but of great quality. By treating Christmas from a different point of view than what we are used to seeing, she manages to present a film that leaves a beautiful feeling in the heart.

Her film won the second edition of the FICMAN (International Narrative Short Film Festival), on November 9, in addition to collecting the prize for the best cinematography. This short film in black and white is not really a Christmas movie. It is rather an ode to loneliness. Because we do not have the right to be sad during the holidays, what should we do when mourning strikes?

In Joyeux Noel, written, produced, directed and performed by Haley Webb, we smile and think. It is therefore with great pleasure that I met (through technology) Haley Webb to ask her some questions.

I invite you to watch the trailer and then, read the interview.

Congratulations for your 2 prizes at the FICMAN. You made a great film.

Interesting, the choice of the black & white. Was it the idea from the beginning or the choice was made during the editing?

Shooting in black + white was the idea from the beginning as we thought the best way to tell this story was in the black + white style of early French New Wave films. Given the darkly comedic nature of the film, the pronounced existentialism of French New Wave was the perfect vehicle for what we wanted to accomplish. We wanted to marry very real, rooted pain with the ruminative nature of New Wave. We also love black + white films and opportunities to make them are rarer these days, so we jumped at the opportunity to make one.

Do you find Christmas to be depressing? Did you want to show the emptiness of the Holliday? Or it was some kind of an excuse to talk about loneliness?

We don’t find Christmas intrinsically depressing, but the image of Christmas and the way it’s talked about and celebrated are so jubilant and family-oriented that for those who are not happy or have lost family members, the confrontation of these images can be alienating and depressing. The reality of holidays, like anything else, is a spectrum of emotional experience. To this effect, we’ve made Christmas movies in the past that also look at these other sides of the holiday experience; not with the express purpose of depressing those who watch our movies, but with the idea of expanding how people conceive of and think about the holidays.

You made this film with only 500$. What was the most challenging? How did you manage to spend so little and make something of this quality? 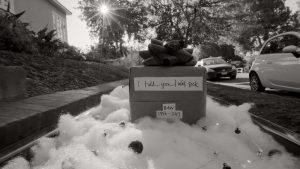 One of the things about really low budget filmmaking is that it forces you to be interdisciplinary. For some people, that’s a burden, but we both really love film and all of the components of film, so to work outside of what our delineated “professions” are is a joy. We have taken the time to learn how to do a number of aspects of filmmaking ourselves, which works in our favor when working with low budgets. We took a controlled craftsperson approach in making this film. We didn’t go overboard in terms of locations, or scope of what we were seeing shot to shot. We also own a lot of film equipment as a product of Alexander’s work as a photographer and cinematographer, which defrayed the cost of renting equipment, we had minimal cast and dialogue which limited the need for LAV mics and ADR, Haley did all of the production and costume design and we storyboarded it quite extensively before shooting. By making these considerations, we could then control much more significantly what was going into the frame. We so enjoy creating and developing the world of a film, that we didn’t feel the pinch of such a lot budget so much as we were energized by it.

Thank you very much for your time!