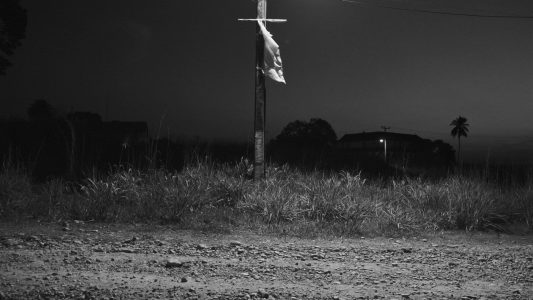 “Is it possible to die and not realize it?
Maybe we are all already dead.”

The RIDM starts tomorrow. I therefore propose, as we are used to do at LPS, to offer you a taste of what the short film section will offer you. This year, we saw 3. Here they are! 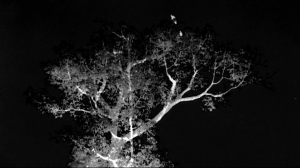 Isidro meanders through the rainforest as he recounts his various encounters with death.

Luck, fate, destin… Sometimes we barely escape with our life. Sandoval is not a lucky man. Unless he is an incredibly lucky man. Twice, he almost died. Once, a bullet lodged in his throat. Another time, it’s a blow with a bottle that almost cuts an important artery. Yet he is there, with his brother, to tell us his story.

This experimental short film takes us into the depths of the equatorial forest and existence. Jean-Jacques Martinod has chosen to tell this story through the voice of Sandoval and his brother, accompanying it with a flood of atmospheric images sometimes swinging into pure abstraction.

If you are interested in experimental documentaries, you can discover Sandoval’s Bullet on November 21 and 23, 2019.

Goodbye Thelma synthesizes footage from the 1991 film Thelma & Louise and footage of the author’s own making to create a mysterious, and at times disturbing, auto-fictional exploration of the joys and terrors of traveling as a woman alone.

Traveling alone for a woman, how is it? It’s this question that is at the center of this strange self-fiction. By integrating her own travel experiences with the images of the cult film, the director makes us aware of the progress and stagnation of the place of women and the roles that are attributed to them.

Through an efficient and meticulous editing, the voices of fictional characters return a strange echo to the silent reflections of the director. The anxiety, the fear and the gaze of others merge with the memories and fantasies borrowed from the imagination of fiction. Almost entirely in negative, the short film becomes a perfect mix between reality and fiction.

Fordlandia Malaise is a film about the memory and the present of Fordlandia, the company town founded by Henry Ford in the Amazon rain forest in 1928.

While watching this short film, two things came to mind: 1, Henry Ford could be considered one of the grandfathers of the destruction of our planet, and 2, a century later, we cannot say that men have changed.

In order to build this mini town, the American burned more than 1,000 acres of forest, he hunted and colonized the aboriginal people who lived there and he mistreated the families that made him rich. And this project was, as you may know, a total failure. Susana de Sousa Dias captures the strange atmosphere of this utopia that has become a dystopia with the help of drone shots and a superb black and white photography. Thanks to the black and white, the director offers a spectacular opening sequence that would kill an epileptic on every time.

Rather than simply narrate the sad facts of this ecological and economic disaster, the director gives voice to the people who live there. So we find ourselves mixing myths and legends and reality. These ancestral myths and songs jostle the hegemony of capitalist “progress” and interrupt the desolation that images in black and white put right in our face.

Nowadays, Fordlandia is a space suspended between times (20th and 21st centuries), between utopia and dystopia, between visibility and invisibility. Houses, factories, the church, are signs of the evolution (or non-evolution) of the place.

Fordlandia Malaise is an amazing documentary that shows, once again, that Man has no equal to destroy nature. A nature that, in the end, always succeeds in avenging itself on Man. You can see it on November 21 and 22, 2019.

The full schedule of short film screenings is available on the RIDM website. As for us, we give you an appointment for our coverage of the feature films presented at the Festival in the coming days.