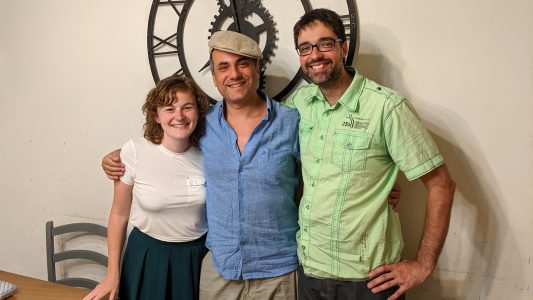 A coffee with… Alfredo Mazzara, director of Ragù Noir and La Barba

“When some women meet together, what are they talking about?”

When we prepared Italy in Short!, we were seduced by the rhythm, the accuracy and the efficacity of the scenario of two dark humor short films, written and directed by Alfredo Mazzara: Ragù noir and La barba. So we grabbed the opportunity to meet him during our stay to Rome in June 2019, in order to learn – and learn you – about his creative process. Here are some highlights of this discussion.

Alfredo: The short films that you chose from my filmography, Ragù noir and La barba, are very typical, they have a trigger, a sequence and an end. The other, L’étoile, is a little more complex. What did you think of L’étoile?

Fannie: I was especially surprised to see the difference between this movie and the other two shorts! The first two are black humor, while L’étoile is more dramatic. The rythm is different too… The first two are probably more accessible.

Alfredo: In fact, the first two can be understood only by listening to. These are very linear stories; whereas L’étoile testifies of a cinematographic maturation. Why are we writing stories? To express something … and that’s what’s happened with L’étoile. Our style does not say who we are, but it says the opinion we have of our audience. It’s an interesting concept that I’ve understood. I want to be understood. If I want to be understood by you, I have to choose a language that you understand. If you speak French, I have to speak French … So, what is my opinion of my audience?

And so I thought… La barba… is perfect. Not in the sense that it’s a perfect movie, but regarding to the script. I wrote the script and had it read to lots of people, the script is written so that when you hear it, even with your eyes closed, you understand. It’s a problem. Then, the story is universal: a parent who offends the main character… Then I asked myself: Ragù noir and La barba, what do they say about me? From what I think of my audience? And the answer has upset me: my audience is idiot!

In fact, it tells something about my own lack of selfesteem. My need to be understood led me to consider the public as idiots…

In L’étoile, however, I imagined my spectator completely fixed on the screen, without interruption, because if he loses a little bit, he does not understand. In fact, L’étoile is made to tell what I wanted.

François: It’s important for you to write the scripts of the films you make?

Alfredo: It’s a type of work that is difficult, especially for short films. I was already asked to make a film and the script did not please me. I would do it with a good script. Because it makes you grow. Take a text and make it work on the screen. But I am more comfortable with my texts. For example, L’étoile is a monologue, but originally there were several shots with different people talking and I cut everything 10 days before the shoot. 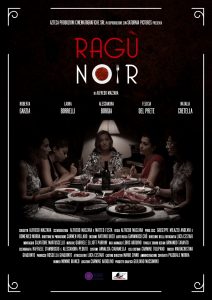 Fannie: Ragù noir and La barba seem to have a similar theme – trapping people – and we found it interesting to show these two films that have a similar theme, but that are at the same time very different. We had questions about this topic. How did this idea come to you? The two films are born from the same idea or one came before the other? How happened the creation process?

Alfredo: Ragù noir is a remake of a short film I shot when I was 24 years old. It was called Goulash and it featured 3 men and 2 women.

Fannie: Oh! Interesting! We were wondering about your choice of staging 5 women…

Alfredo: I had to improve the script to get funding and I thought, if they were all women? We, men, have two major misunderstandings with regard to women. The first question is: why do women always go to the bathroom together? (Laughs) The second question is: when some women are together, what are they talking about? So, with Ragù noir, I tried to investigate the feminine universe and to find out what they are talking about.

But the idea came at the beginning because, when I was 24, I had funds to make a film: 4 million lires, that equates to about 2000 euros today more or less… And I had done anything yet and I still had no idea. But with 4 million lires… We could not do much. At the time, there were huge cameras, beta cams. With 4 million lires, I could have a beta cam. But they were very heavy, we must carry them on a cart… And I discovered a really important principle of cinema: as soon as a character gets up, you have to change the light, the camera … And for 4 million lires, I could only shoot for one day. And so I had to find an idea that takes only one day of shooting: 5 women who are around a table! And what are they doing? They must not get up; they are sitting. We had the idea for a single day shooting!

And I started thinking about this idea. They do not get up … Why? Because if they get up, they die!

Alfredo: Because they were poisoned. Who poisoned them? Why? Because she wants the truth! Which truth? I do not know ! That’s how, quietly, I wrote the script.

François: Is there a connection with Agatha Christie?

Fannie: We immediately thought to 10 little negroes when we saw the movie…

Alfredo: Actually, I did it a bit without being aware of it. I liked Quentin Tarantino’s Reservoir Dogs and my film was inspired by the first 10 minutes of Reservoir Dogs. I copied the structure of the dialogue a bit. This film is very good because the dialogues of this scene anticipate what will happen next. That’s where I got inspired for the style of Ragù noir.

François: From my American point of view, it is a theme that seems very “Italian”, with the family plot… Was it a topic that you wanted to speak about?

Alfredo: So, the family in Italy means two things. The family: mother, father, etc. But it also means the “Famiglia,” the mafia, the godfather. In reality, I am an impostor; I’m not creative: everything is true in La Barba.

François: Is everything really true?

Alfredo: I did not invent anything.

Fannie: Even the beard? 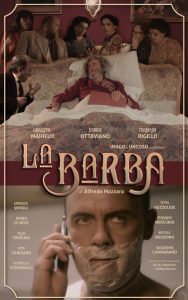 Alfredo: Especially the beard! In La Barba, I put all my family. I have a family a bit special. And the idea came from my uncle.

I was still wearing the beard 10 days ago! When I was younger, the first beard, you want it, you wait for it and I experimented a lot. Every time I saw my uncle, he said to me, “You have no personality!” The hair; I cut them shorter, he criticized; they were longer; he criticized. And I started to write. At the age of 18, I wrote a fantastic story with a knight and a magic sword… When he arrived at this passage, he said to me: “But what the fuck is this story?! You have to write real things!”

So the truth is, La Barba, I did it to tell my uncle what I’ll do to him when he’s going to die. He never gave me a compliment.

Fannie: Did he see it?

Alfredo: Yes. And I took the number 1 actor in Italy; Mariano Rigillo is very well known in his generation. And my uncle was honored of this choice. When he saw it, he gave me compliments for the first time.

Alfredo: Yes, a victory. Then, I saw him 10 days later and he had shaved his beard!

Alfredo: The rest of the story is a bit inspired by my family too. I have four sisters who are about thirty years older than me. I also have an aunt on my father’s side. She said to one of my sisters, “I give you a house if you take care of me, but do not tell others! She took the house and did not say it, but finally she said it to the twins, but not to the 4th sister… The war began! So I put these two ideas together: my uncle, my mother’s brother, and the war for inheritance on my father’s side.

Fannie: So it happened like this. The theme that seemed similar in both short films is actually a coincidence.

Alfredo: If you had to choose a similar theme, it would be “the lie that helps you to find the truth”. The theme is truth, authenticity.

François: How did you write Ragù noir? How to write the voice of 5 women while you are a man?

Alfredo: I imagined a man, I took off the reason… (Laughs) In reality, I have 4 sisters; I was grown up in a feminine universe. And I really like women, in many ways. Man has a linear logic; women are more circular.

For example, the woman calls the man to say, “Help me! The washing machine is broken!,” And the man answers: “Yes, we will call the repairer.” And she replied: “No, you do not understand, I had to bear all the shopping, I’m tired…” And he said, “Yes, yes; we will call the technician.” “You never understand anything!…” The woman only wants to be listened to in fact. Man has a problem; he solves it. His logic is more linear. It fascinates me the way women think. Maternity also fascinates me for example. I will never be a mother, me… Ah, and then, women have really better orgasms; it’s not fair ! (Laughs)

Fannie: And the titles chosen are also interesting: the ragù sauce, the beard… Elements that seem anecdotic, but that finally are the key point of the story…

To understand the role of the ragù sauce and the beard in the two short films by Alfredo Mazzara, watch them respectively during Italy in Short! from November 1st to 3rd, 2019, and from January 4th to 6th, 2020, right here on lepetitseptieme.ca.