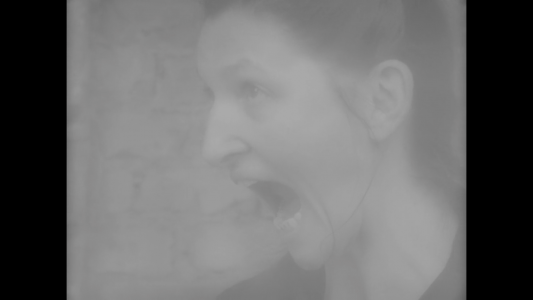 The Family Vault of the Late James Hyland – Epilepsy Crisis

A grave… A man… A woman… Striking images.

Michael Higgins’ most recent short film, The Family Vault of James Hyland, (which you can watch for free at the end of this text) is an experimental film that will burn your retinas. Here is a REAL TRUE experimental movie! 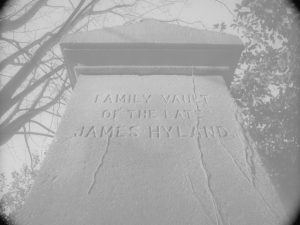 The Family Vault of James Hyland is a wordless film reminiscent of German cinema of the 1920s. The characters are very expressive and they move in often jerky fashion.

He uses make-up which creates a contrast on the faces of his characters. We can see a good example of this in the image at the top of the page. These make-ups combined with jerky movements create a gloomy atmosphere that puts the spectator in front of Death. Obviously, all this is helped by the fact that the film takes place in front of a tomb…

But what makes this short film particularly effective is the combination of music and constant flashing in the images. It feels like being bombarded by a violent strobe light. The aggressive musical sound makes the experience unique.

Our senses are involved because not only make our eyes hurt, but our ears are attacked. Without forgetting the touch… The result literally makes the hair stand up on our arms. To fully enjoy the experience, you have to watch the film with maximum volume, in the most total darkness.

What dazzles me about this film is the editing. In order to create the jerky movements, it was most certainly a monk’s job to carry out the editing. Higgins does not use jump cut, but rather slowdowns and accelerations of images. The result is simply beautifully disturbing.

I invite you to take advantage of your confinement to watch The Family Vault of James Hyland in order to challenge all of your senses!

You can watch the film right here