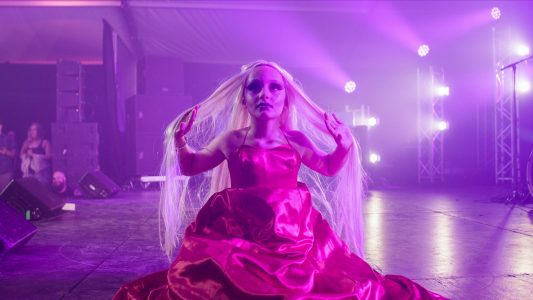 Drag Kids – This is Just Beginning 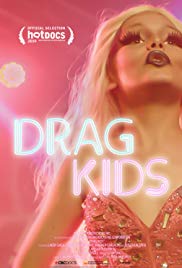 Stephan, Jason, Nemis and Bracken aren’t teens yet. Like other kids of their age they’re living carefree lives except when it comes to their shared passion: drag queen routines. In imitating character (Queen Lactatia, Laddy GaGa or Suzan Bee Anthony) or exaggerating feminine stereotypes (Bracken), these kids transform and display themselves, celebrating their self-expression. Megan Wennberg follows them on the eve of their first group performance at Montreal Pride.

Canadian filmmaker Megan Weenberg, who has directed three short films, raises in Drag Kids questions about self-expression through drag performance. With her unique intuition, she succeeds in depicting the relationships between self-awareness and others among four kid artists and creates a remarkable documentary.

Being different at a couple of levels 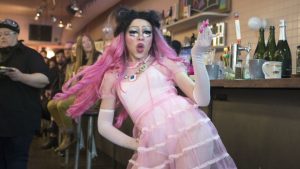 One of the essential themes of this film is authenticity. What means being honest to oneself? It means eccentricity. The kids, who are boys except for Bracken, have a passion for performing feminine characters. They all love to make up gorgeously and to dress up; they all enjoy to wear nail polish and high-heeled shoes. Their behavior is very different from the regular boys’ social image we usually have. Besides, they are also different by partaking to the adult world: they give a drag performance which belongs to the adult world despite the fact that they only are kids. This point of view is well shown through Bracken who would wish to stay in a vogue show, but she was not allowed because of her age. Each kid is facing social norms, and trying to find out a place that would let them be themselves.

The director states: “The kids reminded me about the importance of being true to yourself by being your true self. I think this idea can easily get lost or disregarded as a platitude on a T-shirt or a meme (and it’s very easy to ignore as we get older), but these kids were a real life wake up call to how crucial this is.”

What the film makes us realize is our role in the kids’s education. If the kids are eccentric in one way or another, their eccentricity is something we, adults, have produced. That’s why it is indispensable for those kids to be supported by their parents or other adults, so they can express themselves in their own manner. During the film, their parents appear only in the form of interviews. This choice makes a nice contrast with the kids who are always portrayed within the world of their performances. Parents are there to work behind the scenes to support and guide their children.

To be truly special…

The highlight of the film is the scene where the four kids get together in Montréal (Canada), for World Famous Pride Festival; from Costa Blanca (Spain), Missouri (USA) and Vancouver (Canada). As Jason has wished, they finally meet each other; meet “somebody who is like themselves”, and practice performance together as a group. The scenes of the rehearsal is attractive. In those scenes, we see their similarity from the social point of view, but we see also their individual differences. Stephan looks naive. He seems to need more experiences of performance with others to figure out what is his “true self”. Jason is shy and modest, but is probably psychologically the maturest among them. Bracken is also mature as she takes care of others. She knows her own ability and seems to have a good sense of professionalism. Nemis’s character is as intriguing as Stephan. It is not an exaggeration to say that Nemis has the Peter Pan syndrome: he thinks growing up is hard and he wants to remain a kid forever. Is this because being a kid who drags makes him special?

Their future is unknown. But, at any rate, the film beautifully catches the personalities of the four kids, who are considered as eccentric in the society, through their meeting and the experiences they share. And their personalities are least related to dragging or age, but to humanity. After all, a true self-expression may be realized through interactions with other people, not through one’s appearance or social status, which is what the film indicates.

A worth seeing film and a highly evocative piece.

Drag Kids is presented at the RIDM on november 23 and 24.