A coffee with… Silvio Cantoro, director of La bicicletta

By Francois Grondin
On 4 September 2019
Interviews

In the context of Italy in short!, François on behalf of Le Petit Septième, met musician and director Silvio Cantoro, whose first film, La bicicletta, will be presented on our website from September 6 to 8 2019. The interview was the occasion to learn more about the film itself, but also about South italian culture and way of life. Here are some highlights of this discussion.

François: La bicicletta is your first film. Why did you dedicate it to your mother?

Silvio: Because it’s like a part of my childhood memories. At the beginning of the film, there is a whole story about how cycling is the first means of transportation, when we start to move by ourselves in the streets. There are many childhood memories related to my mother with the bicycle.

François: So, did you write the script?

Silvio: Yes, text and music, everything is mine. The text is the pretext to tell that times have changed: the bicycle is nowadays … In many cities, the bicycle was very used and now in Italy it is not enough used and it should be more because it is an economical means of transport, which does not pollute and which brings well-being and health. It can even contribute to peace. During the war, it was an information tool. Thus, the meaning of the film is to tell how the bicycle is useful for several aspects. So through this film, I liked the idea of ​​conveying or encouraging the use of the bicycle. That’s for the sense. Then, for the narration, I borrowed a precise voice. It is the voice of Anthony Hopkins, an important voice, a deep voice, very expressive. And, the scenography that I used is the city. A natural scenography, which costs nothing. This is the story of short films …

I have always shot shorts for friends so I never did complicated things because I did them for me. I took back what I had filmed during the musical tours I did with my friends and I made montages to have memories of the tours. That passion for the camera, for the memory, I stole it from a musician I worked with called Stewart Copeland, the drummer of The Police. During his travels, he took lots of photos and made collages and he gave me this passion for collage, which gave me the idea to make my first short films touring.

François: So you shot the film in Lecce because it was easier?

Silvio: Yes, yes, let’s say it was easier. However, I must say that on the one hand, it was simpler, more economical, but on the other hand I wanted to remind that Italy is full of cities like Lecce, very small … And so, as much as cities are small, as much as it becomes difficult to use the bicycle. On the contrary, it’s easy in Lecce. Because, in Lecce, as in most cities in Italy, the territory is rather flat, and it is cold only two months a year. There is no reason not to use the bicycle.

Silvio: Rather yes, it can drop to zero in December and January.

François: For me it’s not cold!

Silvio: And then, it’s flat. The historic center is very beautiful. I do not remember being disturbed by cars, by traffic. There are obviously people who use the car because they come from around, but it is not the means of transportation of people who live in Lecce. Those who live in Lecce use the bicycle.

Silvio: Yes, a lot. So, it’s flat, it’s small, you can ride a bicycle everywhere… That’s the meaning of the film. And I wanted to tell it through this dreamlike vision of the city. And this allowed me to win a very important prize called Italia International Tourist Film. It was classified as a tourist film because it shows the city. In Spain, on the contrary, it has been classified as an avant-garde film because there is not a subject in the foreground: this voiceover that speaks, this image that we do not understand well because we are at the start in the park, then in the historic center… The images are not really connected to each other. They are finally an excuse to tell the moral. And then, in the end, we discover something…

François: It’s interesting because the film talks about the past … But today it’s not necessarily better or worse. This is one of the things I liked in the film: you can show how times change, but without depreciating the current society.

Silvio: Yes, in the sense that, finally, I do not believe there is one truth; there are several points of view on things. Certainly, from the bicycle point of view, it was a little healthier at the time … For example, kids from 10-12 years old always went on a bicycle ride. Now, at this age, they are on a scooter. It’s a shame, because it means that when they turn 18, it’s the plane they’ll take these young people! It is a cultural transformation. And if it’s better or worse, we’ll see it in 50 years! However, it is certainly better to enjoy the city, and that’s a point of view, but on a bicycle you are tempted to look up, what you do not do when you’re on foot, or on a scooter. On a bicycle, you look at the balconies, terraces, the sky; the gaze is directed a little higher.

François: That’s what you say in the …

Silvio: It’s something I say, but most of all it’s something you see. Because every time the camera tends to move towards the sky, that’s what we see. And I hope it’s an element that can make people use the bicycle to enjoy the sky …

François: Do you still use the bicycle today?

Silvio: Yes. Unfortunately, only the weekend. I work outside, so I can not use it to go to work. So the weekend … But not to take a long bike ride. I want people to go shopping by bicycle, do everyday things … no need to go on a very long trip!

François: I saw Puglia 4 years ago.

Silvio: Ah! Where did you go?

François: I have friends who were there. I could see quite the whole region. And I went to Lecce for a day. 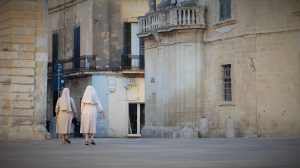 Silvio: It’s a very beautiful city. And then there is the sea next door. And Lecce, unlike most southern cities, is a very quiet city. There is no crime as we see elsewhere, we do not steal bags or bicycles. It’s a university town. There is unemployment … but it is an intellectual unemployment. What better way to take advantage of the job shortage than to go to school ?! At least there is hope …! (Laughs)

So, a very quiet city, where there are several multinationals that provide a lot of jobs. We are very lucky. Also from the tourist point of view. Lecce is part of the region of Salento, the region in the extreme south of Puglia. Now Salento is very popular for tourism. There are many international events. La Notte della Taranta for example, a musical event on traditional Salento music reinterpreted by international artists, including Stewart Copeland, the drummer of The Police. So, there is a kind of revaluation of this region in recent years. In 1995, not everyone knew where Lecce was, because it’s really at the extreme end of Italy. So when I did … A few years ago, military service was still mandatory. I did mine in Perugia, in central Italy. When I arrived there, I was 27-28 years old. People were asking me where I came from and when I said “Lecce”, people asked me, “Where is it? “! (Laughs) Today, Lecce is very famous. A bit because of the soccer team; and then there is La Notte della Taranta, and the sea, etc., etc.

François: Lecce was the cultural capital a few years ago?

Silvio: Yes, it is full of baroque churches of the 18th century. It was an area governed by the Church, the only industry that did not grow. (Laughs) 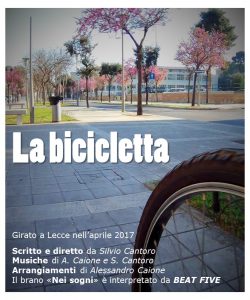 François: We have the same problem in Canada: we have many churches that are no longer used, which we try to find new uses, such as hosting shows…

I have another question about La bicicletta. In the end, during the credits, there is an animation…

Silvio: Yes. So, in the end… I wanted all the credits to be musical, with the singers, the musicians…

François: This is your group?

In reality, it’s a bit an excuse because it’s not normal that the soundtrack of a short film is so long: 30% of the film’s duration is soundtrack. It lasts 11 minutes and there is a 3 minute soundtrack. The lyrics of the credits make the idea of ​​the film clearer. So it belongs to the movie. And so I created this little film in the film to make it last until the end.

The song is called “Nei sogni” [in the dreams] … It says that in dreams we are better than in everyday life; in dreams, we imagine loves that last for life and we imagine so many beautiful things. And we think before falling asleep: “from tomorrow, I go to the gym; from tomorrow, I go on a diet; from tomorrow, I take my bicycle…” And then, the next day, we forget it. So, in dreams, we are better. That’s what the song says. And so I did not want to subtitle the lyrics, because the text of the song is exactly the explanation of the movie.

François: Do you plan other films?

I brought you a small gift! I would love if you read it.

Silvio: Dal basso … It means with a humble perspective: seen from below.

François: This will be the 3rd book in Italian that I will read!

Silvio: Taranta is the name of our traditional music.

François: Taranta, is it a city?

Silvio: The Taranta is a spider. There is a legend that says that if a person is bitten by the Taranta, she goes crazy and the only way to cure her is to play music. And so music is therapeutic because it has a cyclical rhythm. The basic rhythm of our traditional music is called “pizzica”, because the Taranta “pizzica” [spades]. In fact, this is a problem that dates back to the beginning of the 20th century. The women had to say that they had been stung to get the right to dance. Otherwise, it was not allowed to dance. So, it’s a cultural fact. And so it is the origin of the “pizzica”.

I played several years, until 2015, at this festival and elsewhere: I carried the cultural message of this music outside. Since 2015, I decided to do more with my own projects: shows with my band, or theatrical shows. I am doing a theater show in which we explain why the south of Italy remained poor. A story not told in books.

I’ve been doing this for 2 years with my band, but it’s a fair show for the theater: because we need silence, people who listen to the story. This is not a very well known story in Italy. The show is called Ultimi. [Last]

François: I hope I will have the opportunity to see it… if ever you come to Montreal!

It is obvious that Silvio Cantoro’s work shares the history and culture of Southern Italy, whether through music, theater or cinema. Come breathe the soft air of the city of Lecce while watching a short film, with La bicicletta, presented for free from September 6th to 8th directly on the page of the Petit Septième, as part of Italy tout court!

By Francois Grondin
On 4 September 2019
Interviews