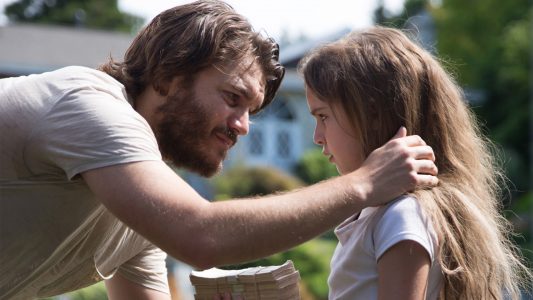 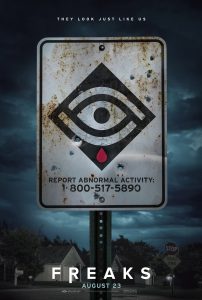 Kept locked inside the house by her father, 7-year-old Chloe lives in fear and fascination of the outside world, where Abnormals create a constant threat – or so she believes. When a mysterious stranger offers her a glimpse of what’s really happening outside, Chloe soon finds that while the truth isn’t so simple, the danger is very real.

With Freaks, Zach Lipovsky and Adam Stein offer us a sci-fi film that is unfortunately very close to reality. But, what is normality actually?

We tend to underestimate the importance of the quality of the actors in a sci-fi movie. But here, Hirsch’s play (seen in Into the Wild) is of high quality. And it was important. Throughout the first part of the film, we dither about whether he is actually protecting the girl, or if he is not rather sequestering her.

Is he another survivalist hooligan who has locked up his girl since birth? This poor girl who does not know what a mountain is, who has never crossed the gate at the end of the yard, is she a victim of this evil and crazy man?

Who are the abnormals?

What is normal? Freaks brings us into a fictional world where so-called  abnormal people are targeted, and arrested. Do you imagine a world in which a different person would be in constant danger of being arrested? It’s as if someone of African-American origin was being targeted when driving a car in the United States… Oh! But this film is not so far from reality in fact.

Moreover, this ethical positioning of the film is really successful. I know, we tend to give our sympathy to the underdogs in the movies. But in Freaks, you never feel like you should pity a group. Bravo!

When I started watching, I did not know what to expect. I could not imagine finding such relevant questions in a sci-fi film. Yes, it is a prejudice. I know. But, in the end, what matters is that I was pleasantly surprised.

Freaks addresses the concept of identity and the fear of differences. And, if there is a theme that is topical, it is this one. Moreover, it forces us to realize that the way we manage our interpersonal relationships is perhaps not really the best…

Freaks is presented at the Fantasia film festival on July 28, 2019.