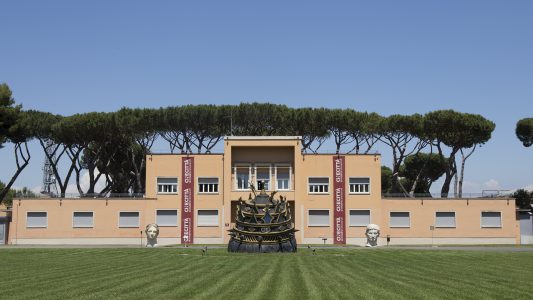 A Trip to Cinecittà – Behind the Italian cinema

The United States have Hollywood; Italy has Cinecittà. Even if the latter is less known in North America, we can say it competes with Hollywood, fulfilling Mussolini’s original wish. Being the stage for more than 3,000 films, including well-known movies and Oscar nominees (Life is Beautiful, for example), Cinecittà now ranks with its American counterpart.

Staying in Rome to prepare Italy In short!, Le Petit Septième has had the chance to visit the Cinecittà production studios and invites you to a behind the scenes of Italian cinema.

A short history of Cinecittà

Inaugurated in 1937 by Benito Mussolini with the famous quote “Il cinema è l’arma più forte”, Cinecittà was fundamentally a tool for fascist propaganda, a means of promoting Italian culture throughout the world. In fact, between 1937 and 1943, the 279 films that were shot there were all subject to Mussolini’s censorship and showed a postered image of Italy. Neo-realism was borned in response to this censorship. Several directors, such as Luchino Visconti and Roberto Rosselini, seek to show what real life looked like in the post-war years. Although neo-realism died in 1952, the Italian cinema of the following decades retained a tendency towards social issues.

But Cinecittà did not only gave birth to neo-realistic movies. Between 1950 and 1965, many american movies were shot there, especially those which showed Ancient history (Quo Vadis, 1951, Ben Hur, 1959, Cleopatra, 1963). Cinecittà became so popular among american producers that it got the nickname “Hollywood on the Tiber”. Nowadays, you cannot shoot a film that takes place in the Ancient world elsewhere. American series Rome (2005-2007) is one of many productions that were shot there.

Originally designed by Gino Peressutti, the 40-hectare architectural complex, which contains 21 different studios,  allows now to produce more than 50 films a year. Cinecittà owns, by the way, the largest studio in Europe, the studio 5, which is 2800 square meters.

Although Cinecittà is in Rome, it looks like an urban oasis in the middle of the Italian countryside. To get there, you must take the metro line A to the penultimate station. Fortunately, the metro station is really close to the entrance nowadays. Located in the neighborhood of the Parco degli acquedotti, an immense field where are the ruins of the ancient aqueduct, it was rather difficult to reach at the time of its construction. A special streetcar needed to bring in workers and artists! 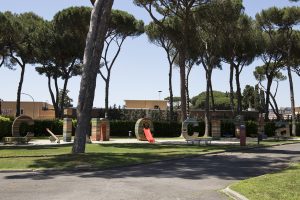 When entering the site, what we see is the beauty of the place. The sleek architecture of Gino Peressutti blends perfectly with the umbrella pines that shade the terrace of the café, the small children’s park created by the giant letters forming the word “cinecittà” and the iconic sculptures used in different films.

The guided tour then shows the visitor various films settings, be it the popular streets and the political center of Ancient Rome, recreated for the TV series Rome, or the temple of Jerusalem, which served in particular for The Passion of the Christ (Francesco Frigeri, 2004). The authentic aspect of these reconstructions is striking: we could not guess that these sets are actually made of fiberglass, which makes them waterproof, but never as durable and solid as the stone they imitate. Fun fact: it was necessary to employ 40 painters during two months to recreate the colors of the temple stone… which we see for 5 minutes in the movie! 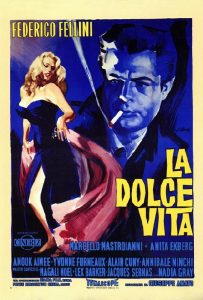 No doubt, Cinecittà is really a dream factory, as director Federico Fellini has nicknamed it. Cinecittà’s story is indeed closely related to Fellini’s. The director shot numerous films there (8 ½, 1963, Roma, 1972, Casanova, 1976), such as the famous La Dolce vita (1959), for which Rome’s Via Veneto has been fully recreated in Cinecittà’s studios. A copy of Venice has even been built in the studio 5 for Casanova, thanks to its two undergrounds that can be filled with water. Do not be afraid, the Trevi Fountain you see in La Dolce vita is indeed Rome’s! What you do not know, however, is that the scene was shot in February, a rather cold month, even in Rome, to avoid the hordes of tourists who usually mass there…

Fellini loved working at Cinecittà so much that he asked for a small studio where he could live and receive artists with whom he worked. In tribute to this renowned Italian director, one of Cinecittà’s buildings bears his name today.

The exhibition then goes on in the Palazzina presidenziale, where the visitor follows the history of Italian cinema, from 1937 to today. He is then invited to see the backdrop of a film production in the interactive rooms devoted to costumes, soundtrack, dubbing or even post-production. The guided tour and the exhibition Cinecittà si mostra are accessible and will please both amateurs and neophytes. Children can even explore cinema thanks to the educational programs set up by the institution and its small building Cinecittà dei bambini.

In short, during your next stay in Rome, a detour to Cinecittà is essential. If you are a movie fan, or if you do not know much about it, Cinecittà si mostra will charm you and give you, as it did for us, an irresistible desire to come back to the Italian cinema. No doubt, this trip to Cinecittà was a great foretaste for Italy In Short!… which begins on August 9th!