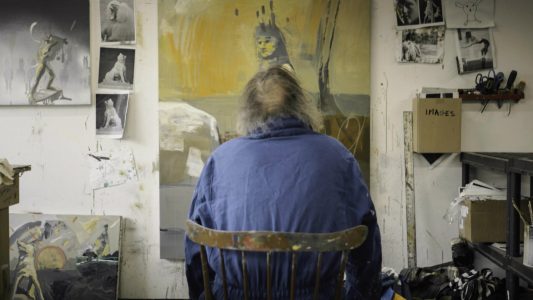 The 2019 International Festival of Films on Art (FIFA) is held from March 19 to 31. This year’s edition offers the public nearly 200 films from more than 40 countries.

Documentaries, interactive experiences, films by artists and recordings, including a special screening of René-Richard Cyr, Daniel Bélanger and Michel Tremblay’s Les Belles-Sœurs, are on the program.

And as we usually do when we cover a festival, I will tell you about 3 shorts that will be presented this week at the FIFA. 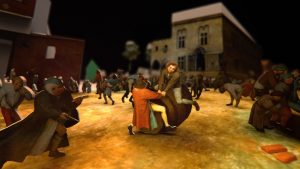 Pieter Bruegel the Elder’s 1560 painting Children’s Games portrays 200 children playing 91 different games. In this funny, irreverent, and erudite film, the children take control of the painting, bemoaning their weariness at having to play for all eternity.

Have you ever seen movies in virtual reality? Condamné à jouer uses this technique to get us into Bruegel’s famous painting. The director imagines what the characters could say if they had the ability to do it. The idea is original. The treatment… is not convincing. One really wonders why the director deals with this subject. And we do not feel that VR is used to its full potential. Maybe a movie to see if you are looking for a first experience not too destabilizing.

In March, 2015, three paintings by artist Matt Jaeborn were auctioned at Christie’s. These works were unique, as they were made from a paint-by-numbers kit when the artist was still a child. What’s more, the triptych sold for the extravagant sum of $14 million. What was behind this outrageous sale? What does it say about the art world? This captivating documentary keeps viewers on their toes with its enthralling investigation into the absurdities of the contemporary art world.

Criticism of contemporary art or criticism about our mercantile society in which speculation has more value than talent, Jaeborn, numéro par numéro hits where it hurts… But is Jaeborn really an artist? Or if it is only a mirage knowing how to play the “game”. This is the question that makes this fantastic film meaningful. This short film is really a document to see and especially… to discuss. But if you’re the type not to watch the credits at the end of the film, I would still say that respect commands you to stay. And me too…

The Massacre of the Innocents (Alain Boisvert) – Canada

An art film on artist Detlef Gotzens, who painted a contemporary canvas inspired by Peter Paul Rubens’s work The Massacre of the Innocents, on display at the Art Gallery of Ontario. The painting reflects a tragic period of the nineteenth century and offers an intimate view of the artist at work.

With this short film, Alain Boisvert takes us into the creative process of DEGO. But in his desire not to let us see too much of the work before the end of the film, the director uses inefficient transitions and, above all, disturbing ones. At times, by the way, we do not really understand the choice of images. Why show us Gotzens who explains how he thickens his painting when they cut the sequences where he explains the reasons for which he was inspired by the painting of Rubens? It’s a shame because the subject is interesting and deserves more attention. Especially when we see the final result.

Whether you are an expert in art or not, the FIFA offers a wide selection of short films that will allow everyone to find their pleasure. If I wanted to make a suggestion, I would be tempted to tell you to go see Jaeborn, numéro par numéro.