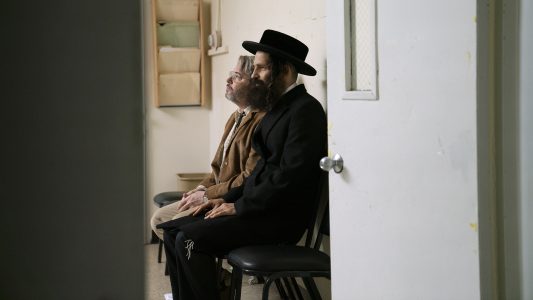 “Then the dust will return to the earth as it was,
and the spirit will return unto God who gave it.”
Kohelet 12:7 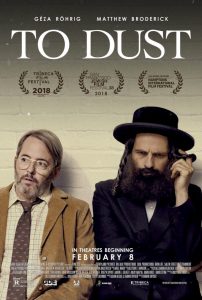 Shmuel, a Hasidic cantor, distraught by his wife’s untimely death, struggles to find religious solace while secretly obsessing over how her body will decay. As a clandestine partnership develops with Albert, a community college biology professor, the two embark on an increasingly literal undertaking.

With To Dust, Shawn Snyder offers a borderline blasphemous, tragicomic conversation between science and religion, and an exploration of the idiosyncrasies of grief.

To Dust presents a unique story about a universal question: how to deal with the loss of someone we love? Snyder’s film helps us understand that there is no right or wrong way to deal with death. There are just a lot of questions that will remain largely unanswered. And this, no matter our beliefs. Here, it is the wife, the person on whom a man can count on, who dies. And although Shmuel is hasidic, his reaction could be understood by anyone. The director added only a humorous component that comes from a caricature of what a person might want to do.

Then there is the friendship, the comfort that can exist between two men who need each other. For Shmuel, his companion is the scientist who can help him understand; for Albert, the friend is the one who gives him a mission, a meaning to everything he does. There are indeed traveling companions who are sometimes affected by our pain. Or at least, companions who can find, just like us, a practical sense to spend time with each other.

As he struggles to find solace in his religion, which presents a rigorous schedule for mourning, Shmuel is increasingly haunted by the visions of the rotting corpse of Rivkah, his wife. Convinced that his soul will suffer until her body becomes dust again, Shmuel decides that he must seek to understand the physical processes of her degradation, despite the blasphemy inherent in any scientific investigation. At the risk of being discovered and expelled from his religion, he finds himself outside his enclave, where his research leads to Albert, a dilapidated biology professor at the local community college.

Thanks to these two characters superbly interpreted, Snyder succeeds in presenting two points of view that are contradictory, so as to make us imagine they are close to a reconciliation. But it is the desire to criticize the fact that mourning is almost timed among the hasidic who led the director to make this film. “And while religion can offer a much-needed comfort, the notion that an individual grieving process can be pre-determined is to me, an offensive suggestion. I believe that innate emotions, if suppressed, will fester.

And it is with, a sometimes subtle and sometimes fat, humor that we navigate between religious beliefs and scientific beliefs. But always with respect.

It is with a humor and a “fable-like” approach that To Dust entertains us. By using Jewish folklore, itself full of witty myths and blasphemies, disturbing games and supernatural gossip, the film introduces us to a little-known branch of Judaism (at least it was my case). The feature film points this folkloric tangent to the contemporary Hasidic world and the ancestral brambles that it borders.

But it is when Albert is involuntarily embarked on this strange adventure of amateur judicial research and begins to guide Shmuel through outrageous experiments that aim to get closer to a schedule for Rivkah’s decomposition – beginning with the theft, the choking and burial of a pig, which To Dust takes us out of our comfort zone. With their macabre misadventures more and more perilous, the strange duo will stop at nothing to satisfy its curiosity and to find for Shmuel the comfort he desperately seeks.

And although the religious theme could have brought a scandal, we find ourselves all the same in a smooth ride. 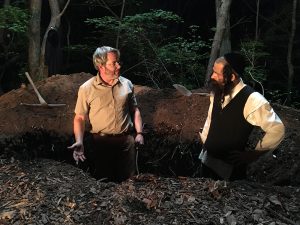 Another interesting point is Snyder’s view of our efforts to avoid dealing with the realities of death and decay – to read the decomposition of the bodies of our loved ones. And how morbid it is to look at this biological truth in the face, but how spiritual in itself.

In the end, To Dust leads the viewer to wonder how, after a devastating loss, comfort and meaning could be found in any of the worlds – religious or scientific – and how they could be reconciled… or not.