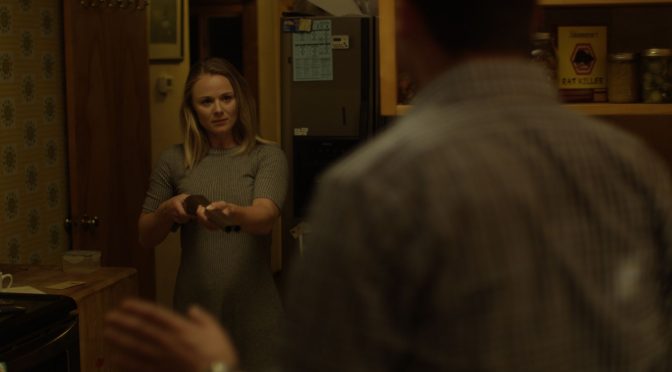 “Men murder whores. Women murder Their babies. What Does that make me?“ 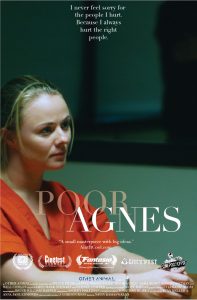 Agnes(Lora Burke) is looking for something bigger than her, an experience that transcends the mundane of everyday life. This is why she enjoys the serial killings. Mike (Robert Notman), a private detective a little too sure of himself, has the misfortune to displease her. She therefore wishes to make him her next victim, not without exploring the psychological edge that could grow on him. The film depicts the strange bond that weave between them.

In Poor Agnes, Navin Ramaswaran creates a female character like we rarely see. Not only he staged a murderous woman, but the woman does not only use traditional female weapons (seduction, poisoning…), she also applies force.

A kind of feminism?

Can we speak of a feminist film? Perhaps. I do not say that this is a feminist manifesto, but some elements lead me to say that this is a work that, at least, offers something that approaches the feminist concept. First, the female leading roles in a film directed by a man are not so frequent. Add to that the fact that the girl in question is not undressed in the film, which contributes to the scarcity. And if we finally add that the character is a sociopath who kills simply for the pleasure it brings her… You get the idea?

Agnes Poelzl, this troubled woman who practically lives recluse, is what might be described as a serial killer. Moreover, Lora Burke says she watched a lot of videos about serial killers to be well prepared for this role.

“I watched a lot of Youtube.com videos. I sought out interviews with well know killers like Jeffery Dahmer, Ted Bundy, Amanda Knox and so on. It was definitely harder to find footage of female psychopaths.” said Burke.

Poor Agnes revolves around the Stockholm syndrome. It is through the relationship between Mike and Agnes that this theme appears. Unfortunately, we do not develop sufficiently the “how”. Mike develops too quickly fear and a big “need” of his tormentor. It is still interesting to see a man developing this syndrome to a woman. Usually, we see the opposite.

The big question here is: How much Agnes managed to reach the mind of Mike? Will he eventually wake up and defend himself?

Some scenes of Poor Agnes are particularly interesting. I’m thinking of the scene in which Agnes and Mike are at the table with Chris, another victim. Chris has obviously been mentally affected by drugs Agnes gave him, and could not speak properly. She begins to mock him. At first we laugh a little as one mocks a different kid at a young age. But, eventually, a discomfort arises. It becomes disturbing. And there, bravo!

Ramaswaran’ film, winner of the Best Canadian Film at Fantasia, presents a narcissistic woman, cruel and clever. A killer with a hot temper who does not get scared by anyone. And she has only one God: Agnes Poelzl.

Pay yourself a trip with a human monster, maybe it will lead you to understand how serial killer’s victims can get bluffed by the charisma of their executioner.