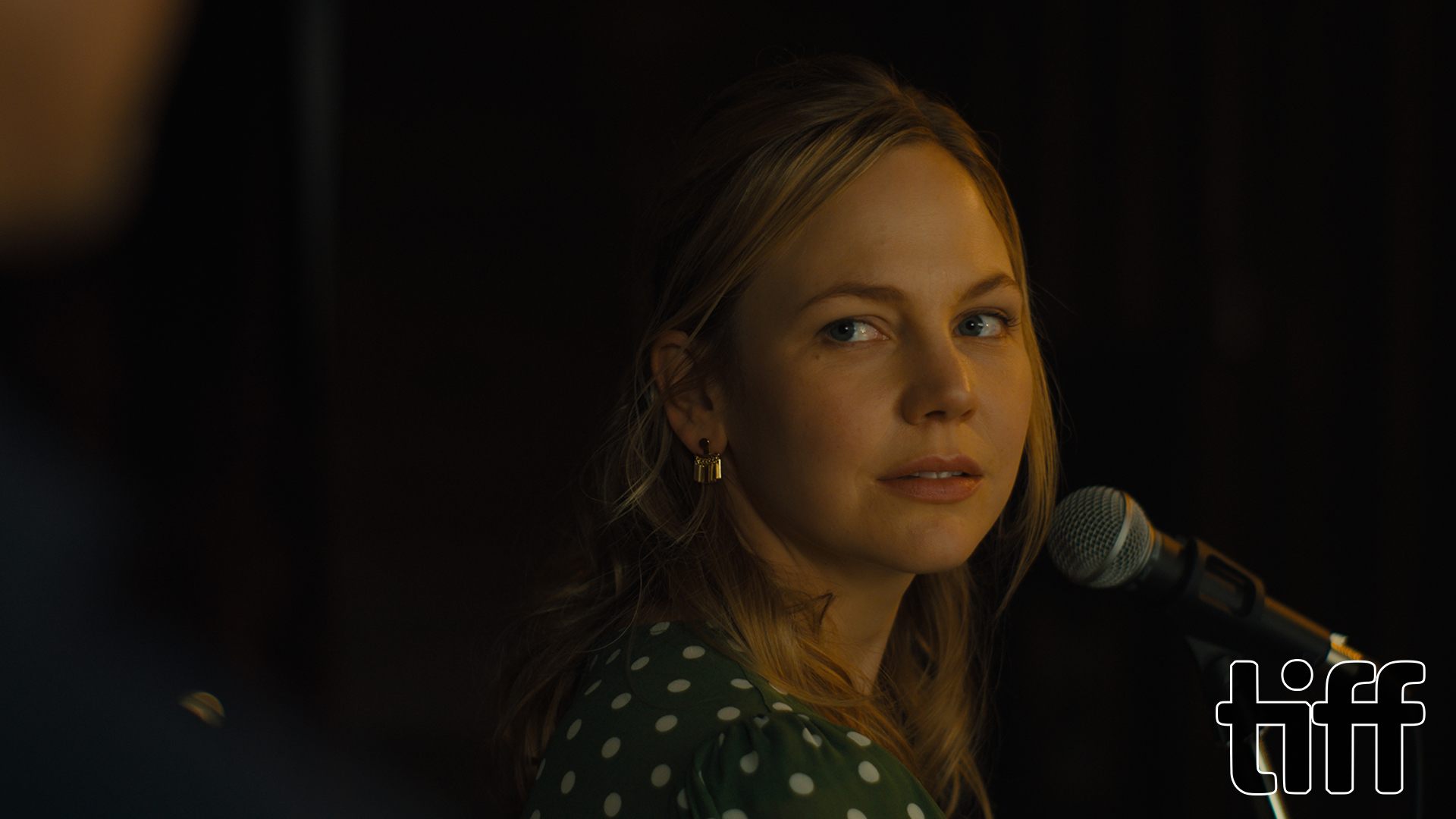 “I swear I will never, ever, love anyone else.”

The Swearing Jar is Carey’s story: a music teacher who throws a birthday concert for her husband, Simon, which rekindles reminiscences of their past. Through comedy, music, and memory, we follow the story of Carey (Adelaide Clemens) and Simon’s (Patrick J. Adams) relationship, the birth of their child… and the lie that threatens to f*&k it all up! Equal parts humour and heartbreak, it tells two love stories at once – exploring the blessings and challenges of romance, marriage, parenting, loss… and moving on.

Using a bold narrative strategy, Lindsay MacKay, with The Wearing Jar, argues that true love persists – sometimes painfully, sometimes exhilaratingly – no matter how we or our circumstances change.

An adaptation with a powerful structure

The Swearing Jar is specifically designed for audiences to have access to how the characters connect, how they relate to each other, and the romance between them. The public discovers things as the characters live them without knowing the time. It is critically important to the integrity of relationships that the viewer experiences the story without any emotional coloring. They see Simon and Carey at times in their lives when they are truly happy, when they are expecting a child, as they go through the usual ups and downs of the hormonal changes of pregnancy. But we see it as it happens, untainted by the retrospective nature of the concert around which the film is built.

The film, therefore, takes the spectators through time, without defining the exact moment of each action. Thus, MacKay and Hewlett can sow clues as to what is really going on. The interweaving, even the editing of the feature film is its strength. The Swearing Jar is a powerful example that a completely ordinary story, seen 5000 times, can become strong, original and unsettling when well written and directed.

A mix of genres

Some films are more difficult to put in a box than others. The Swearing Jar is at times a romance, a drama, a comedy and a musical. It is also a film that took me by surprise. Besides, the musical aspect is spectacular. Kate Hewlett is amazing. Not only did she write the adapted screenplay of her own (award-winning) play, but she also wrote all the songs.

The Swearing Jar happens to be a high-profile independent film, with huge mainstream appeal, incredible emotional impact and a gorgeous visual style. Not to mention the music. Since the film is built around the songs that Carey and Owen (Douglas Smith) perform, the choice of melodies and lyrics was crucial. The performance of Clemens, who is not a singer, is perfect. As for her sidekick on stage – which is the third piece of this kind of love triangle –, he demonstrates all his talent as a musician, but also as an actor.

To return to the mix of genres, we would have to add the love thriller. Hewlett’s screenplay — superbly directed by MacKay — doesn’t just engage the audience; it plays with it. For example, at the very beginning of the film, Carey announces to Simon that she is pregnant, at the same time when he was going to announce something to his lover. Neither Carey nor the audience find out what Simon was going to say that day — until his secret becomes the heart of the plot. There is a lot of complex dialogue and emotion in this feature film. To keep these scenes captivating for the viewer, MacKay uses her camera effectively by setting herself up behind doors or using reflections. She blocks frames in order to create an impression of secrets and to make the spectator live in this world of lies and to make them feel these secrets. Then, she places her characters together, but without them communicating except by looks: Simon watches Carey when she plays or in the kitchen when she cooks. Carey goes to the bookstore and watches Owen as he works.

These elements, which belong more to the thriller, fit wonderfully into this romance.

Beyond this love triangle, there is the character of Bev, Simon’s mother. A crucial character that is wonderfully played by Kathleen Turner.

She’s an angry woman, stuck somewhere in the past when her husband left her after multiple adventures. She never got over it. She needs a target for her rage, her disappointment, but she’s never really found anything satisfying. And sometimes she takes it out on her son, Simon. But make no mistake; there is love between Simon and Bev. But her bitterness towards men was also transmitted in her relationship with her son (a man). At one point, she said this terrible sentence to her daughter-in-law: “men will always leave, one way or another”. She tells her that when the young woman is pregnant from Simon, Bev’s son.

The Swearing Jar is a complex musical romance about what a couple will do for love: swear not to swear, keeps life-changing secrets, hold on to feelings longer than most would expect.

It’s a film that’s both beautiful and horrifying, just like romantic relationships can often be.