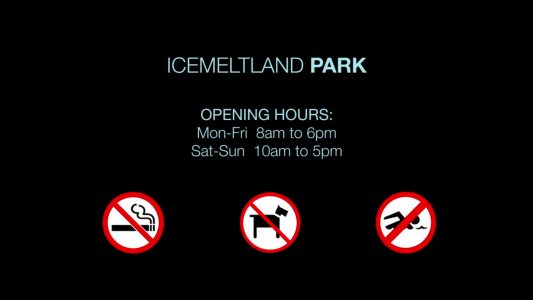 “Wow, that was terrific!”

An amusement park designed for families, couples, friends and everyone wanting to visit. You don’t know where to go on holidays? Or not sure how to spend your honeymoon? Come to Icemeltland Park, you won’t regret it!

An intriguing summary, and a shocking film. Liliana Colombo’s Icemeltland Park, forcefully shows human stupidity. Do you find the melting glaciers funny? And the tsunamis that kill thousands of people? They do.

We often hear that the great glaciers are melting. So what? The melting of these mastodons causes two main problems: a rise in sea level, which creates floods, and tsunamis in hot regions.

It is, therefore, one of the 2 things that the short documentary by the Italian director shows. In order to demonstrate how important the melting is, the documentary is composed of several interactive images, allowing to show the situation at two different times. We see, for example, the evolution of a mine in South America, over 3 years.

But these images are also the only real negative point of the film. To the average viewer (of which I am certainly part of) these images are really not clear. At times, I didn’t understand at all what I was supposed to see. And, therefore, I cannot be sensitized. And that’s the point of this movie, right? 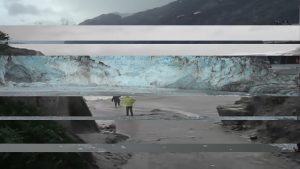 Happy cries and laughter. Here is what accompanies the amateur videos that make the other part of Icemeltland Park. And the message is violent: welcome to Icemeltland Park, where tourists “admire” the collapse of the Greenland ice floe. Then, the screen splits up, revealing, in a subliminal way, the apocalyptic scenes of the sea invading lands in the four corners of the globe.

But as human stupidity has no limit, at the same time as we hear the cries of joy and wonder of people watching the ice melting, we see and hear those who marvel at the tsunamis and, above all, , the people who are struck by these. A person even seems very happy wondering if a poor man died after being hit by a wave. “Is he dead?” And while the storm leaves an opening to save the man, the spectator stays there, to film. The show must go on, right?

These sequences of destruction are accompanied by virulent sarcastic comments from the director – in subtitles – of the kind “above all do not stop filming to help him”.

Through the editing, the filmmaker pursues her inventive work of satire, mimicking voyeurism, narcissism and inconsistency in a society of the spectacular.

Composed mainly of amateur videos collected on platforms such as YouTube, Icemeltland Park takes the viewer in the midst of dystopia, to the amusement park of the end of the world.

Icemeltland Park is presented at the RIDM, online, from November 12 to December 2, 2020.