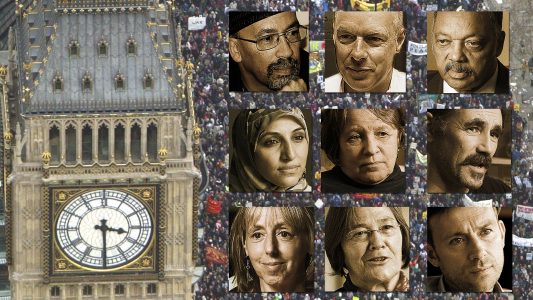 We Are Many – The Greatest Protest in History

“They are few and we are many. And if we come together, we’re a force.” 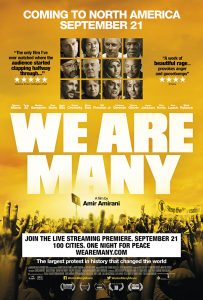 On February 15th, 2003, up to 30 million people, many of whom had never demonstrated before, came out in nearly 800 cities around the world to protest against the impending Iraq War. WE ARE MANY is the never-before-told story of the largest demonstration in human history, and how the movement created by a small band of activists changed the world.

After 9 years of research, filming and traveling in 7 countries, Amir Amirani presents We Are Many, an honest documentary which, despite several weaknesses, remains a relevant historical document.

The Greatest Protest in History

This day of February 15 even entered the Guinness Book of Records. Since then, there have been monster gatherings – among others with the protests for the Earth led by Greta Thunberg – but we must not forget that 2013 was before the rise of social networks. No Twitter or Facebook to mobilize the troops. And it all started with a group of activists who wanted to oppose the creation of a war in Iraq. Why? Because this war was unjustified and the political leaders who wanted to get into it lied about the reasons for this war. Avenging September 11… But Iraq had nothing to do with September 11. On the other hand, Hussein was not an ally of the United States and there was a lot of oil in that country.

The objectives of the documentary is to show how big a demonstration it was. And it seems to want to show, too, that when we unite, we can change the world. But this unjust war, didn’t it actually take place? The message we hear when we finish We Are Many is that we may be right, we may have the numbers, a government can always cover its ears and do what it wants. The United States and the United Kingdom will have gone to war. They will have driven Hussein out and put in place an even more destructive regime. Like in was the case in Afghanistan when they set up the Taliban and Al-Qaida in place.

I’ll repeat. A little over a month after this demonstration, the war in Iraq was launched, led by the United States and the United Kingdom, with foreseeable tragic consequences, from which we are still living 17 years later. And although the UN declared this war illegal, Blair and Bush have never been charged with a war crime or a crime against humanity. Despite the hundreds of thousands of civilians who died during this war. One sequence (possibly one of the best in the movie) shows Bush even making jokes about the alleged weapons of mass destruction Iraq was supposed to possess. Weapons that have never been found despite the almost total destruction of the country. No, there wasn’t any.

A few weeks ago, I saw On the Wire, a documentary on the same subject, but from a Canadian perspective rather than a British one. Some figures vary, but the conclusion remains the same: It was known that there were no valid reasons to attack Iraq, but the United States and the United Kingdom took the opportunity to lead their little war.

Amirani’s documentary is long. He could have cut a good fat 15 minutes. It’s repetitive. There may be too many people coming to give their opinion. Political analysts are relevant, activists who participated are relevant. But there are a lot of actors and musicians who are featured for various reasons. But it looks mostly like they’re there to add some big names to the credits. Just for fun, here is the long list of speakers:

Moreover, the more I look at this list, the more I find that there are perhaps too many activists too. Especially since the message is always the same: it was so beautiful and big…

In the end, We Are Many is a relevant historical document, but a bit long and boring film. It is still interesting to see it.