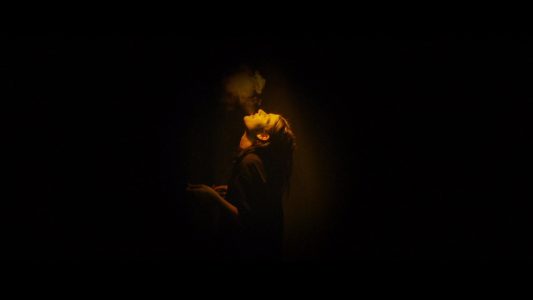 « You ever learn any self defence or anything like that? » 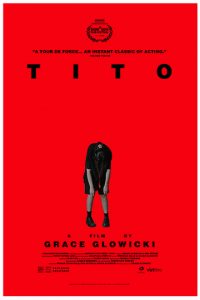 Tito is trapped. With lank black hair, curlicue sideburns, and an emergency whistle dangling from his neck, he is so stricken with fear that he’s developed a hunch in his back. Any attempt to venture into the outside world is met with the threat of elusive predators who hunt him relentlessly. Starved for food and security, Tito’s terrorized existence threatens to overwhelm him — until the sudden arrival of a cheerful intruder, offering breakfast and protection… Tito is a story about predation, friendship, and fear, told through a wildly inventive and expressive new lens.

For Tito, her first feature film, Grace Glowicki, offers a unique perspective on predation, friendship and fear. A disturbing film that won the Special Jury Prize at Sundance.

Why is a man played by a woman?

There is a question that stuck in my head during part of the film… Is it a woman playing Tito? Well, yes. Grace Glowicki, the director, is also the lead actor. But why did she choose to play this male role when there are several talented actors who could have played the role?

“Core to my approach of this topic is my belief that the fear women must endure as a result of predation does not truly belong to them – it belongs to the (often) male predators who provoke it. With this in mind, I decided to perform Tito using cross-gender acting – to exorcize the fear that echoes through female bodies, and regift it to the male psyche from whom it originates.”

I must admit that the reason explained by the director is really not obvious when watching the film. That said, when we see this character with this half-boy / half-girl look so scared by this inner monster, we realize that it is not important that he is not gendered because – and here I join Glowicki – these demons can terrorize any anyone. Plus, she’s so good playing her character that she can’t be faulted for her choice.

Tito, this young man who could be considered agoraphobic, is impactful. He is strange to the point of being fascinating. He’s scary to the point of being beautiful. The director also explained this: “I also felt a conviction that the best way to communicate these ideas would be through an unusually physical, silent, almost clown-like performance.”

Visually, Tito is equally stunning. As is often the case in experimental cinema, shots and camera angles are always well thought, and often unexpected. We notice it especially at the beginning of the film.

But what catches the attention are especially the few shots that the director introduces at times in the scenes where Tito smokes a joint. Everything is black, and Tito appears in the center, on an orange-brown background. You can see what I’m talking about on the header of the text, at the top of the page. These images, add a little something surreal to the film. A bit like this opening sequence in which Tito runs in the dark. Images of perfect beauty. The kind of images that immediately bring the viewer into a second state and where he can no longer take his attention from the screen.

There are some films that don’t provoke anything in us when we watch them. There are those who make us laugh, or cry. Then there are the rare films which, as is the case here, causes a deep emotion in us.

Tito is not a film that will appeal to everyone. It’s a slow movie, in which there isn’t a lot of dialogue. But it’s a film that touches where it counts. Autumn is slowly approaching. So now is the time to settle in with a high quality film.