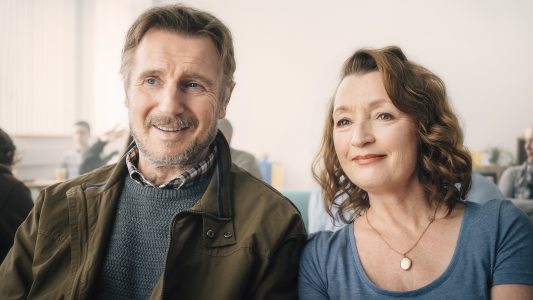 Ordinary Love – In the Aquarium

The reassuring peace of the everyday life

The plot of the film Ordinary Love by Lisa Barros D’Sa and Glenn Leyburn can be summed up easily: an old couple, Joan (Lesley Manville) and Tom (Liam Neeson), married for many years, enjoy their retirement by indulging to calm happiness within their four walls. It’s an “ordinary love” that doesn’t require an escape from the routine that some would be afraid of. For Joan and Tom, on the other hand, their little world in Northern Ireland – shopping at the supermarket, walks by the water, TV evenings with a beer in hand – is enough to make them happy… Or: after having lost their daughter at a very young age, how reassuring is a daily routine that works well. But when Joan detects a knot in her chest, the couple is again faced with a terrible ordeal…

Cyclic structure: from happiness to the restoration of happiness

The film begins and ends with the Christmas festivities that mark the culmination of withdrawal into the home. This religious holiday having an aura of peace so persuasive, it seems to mark a truce to all the horrors that the lambs have to face during the remaining year. This is exactly the case in Ordinary Love. Hoping not to reveal too much, let’s remember to reassure us (because when it comes to cancer stories, who does not want to hear a happy ending to change?): At the start of the film, Joan and Tom decorate their house in peace , still unaware of what will happen, and at its end, they will do the same – happiness being back. Admittedly, the period between the two events is overwhelming and full of uncertainty, but chronologically follows the “ordinary” treatment of a patient with breast cancer: the first examinations, the biopsy, the removal of the node in a first operation, chemotherapy, breast reconstruction in a second operation, without forgetting the incessant expectations and cruel side effects, also “ordinary” in this kind of therapy. In short, a classic narration.

English-speaking critics are full of praise for this film, which is, according to it, hardly “ordinary”: The actors, Lesley Manville and Liam Neeson, would be the ideal choice: Liam Neeson being above all convincing in a role with another polarity of films of Hollywood action in which we usually see him. “I didn’t want to be a different character to who essentially I am: Liam Neeson from Northern Ireland. I found that very liberating […]”, he comments on his character. Then, according to critics, the film would be extremely touching in the sense that it shows an unshakable love, a mutual solidarity where one is ready to do everything for the other, and this thanks to the brilliant script by Owen McCafferty who, in addition, tells a true personal story.

In principle, I have nothing to object to but, despite all this, call me cold or impassive, I was hardly touched. The story is sad, it’s true, but how many times has it been told before? Joan is admirable in the way she manages the diagnosis and talking to other patients – to inquire about chemotherapy, to encourage them, to joke with them – you can almost feel her in the role of a journalist, the curious one and empathetic, but who remains, it seems, always “outside” of this sterile world, like Tom’s fish behind the aquarium glass. Oddly enough, it was the sudden death of this animal, that Tom is forced to throw in the toilet, that moved me the most. This speechless fish that looks so much like his wife…

At no time does she share her emotions and the questions that could nevertheless haunt her during this not at all “ordinary” period, but singular and worthy of being told: the emotions about her own death, the questions about her femininity threatened by the loss of her breasts and hair. While making love to Tom, after the reconstruction of the breasts (procedure never having been questioned either), she asked him: “Do you miss them? Tom answers, a little irritated,: “Do YOU miss them? What goes on in his wife’s head remains inarticulate. Just too bad.

Sublime: the decor, the soundtrack, the poster 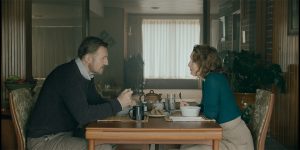 Having said that, Ordinary Love is not a bad movie. It’s a very good film even, but it does not seem to me to be exceptional or innovative, neither in terms of themes nor in terms of its technical production. All the same, let’s admit that the choice of decor – the earthy tones of the objects, the woodwork of the house – as a family cocoon is very successful, which co-director Leyburn puts forward when he says: “The house is designed to feel like Tom and Joan’s cocoon. If you look at how we used the curtains and how you don’t really see the outside […], [i] t’s like Tom and Joan have closed themselves off from the world.

This withdrawal is the first impression that the public gets, moreover, by hearing the words of the song I’ve Got My Love to Keep Me Warm composed by Irving Berlin in the 1930s and interpreted in the film by Billie Holiday twenty years later, in full economic boom. “The snow is snowing, the wind is blowing, but I can weather the storm! What do I care how much it may storm? I’ve got my love to keep me warm”, she hums full of conviction and contemplating the movie poster – Joan from the front in Tom’s strong arms, taking the whole picture and slightly raised (and so idealized) by the low-angle view, the sky covered in their back in the background (the “danger” thus remaining outside the field of their attention) –, we realize how much this fatalistic idea also applies to the northern-Irish couple.

Do you want a film with a serious theme, beautiful actors that will not depress you, but that will leave you with a cottony feeling? Without hesitation, I would recommend Lisa Barros D’Sa and Glenn Leyburn’s Ordinary Love. If you are interested in deeper psychological analyzes or feminist explorations, I would have some reserves…