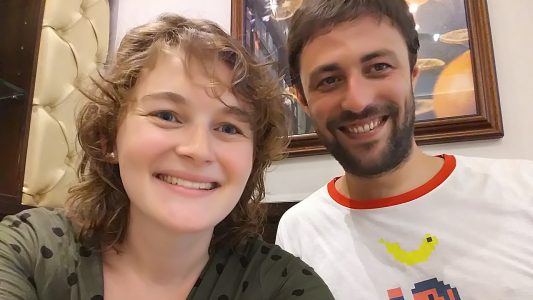 A coffee with… Marco Scotuzzi, co-director of Magic Alps

By Fannie Caron-Roy
On 2 October 2019
Interviews

In July 2019, Fannie met Marco Scotuzzi, co-director, with Andrea Brusa, of short film Magic Alps. Magic Alps will be presented here, on Le Petit Septième’s website, as part of Italy in short! from October 4 to 6 2019. A coffee with Marco Scotuzzi was the opportunity to discuss his work as a director, the creating process of the film, Italian politics and his future projects. Here are some highlights of this discussion.

Fannie: Thank you so much to have come here for this meeting. Did you come to Rome for work?

Marco: So, I’m a director, but I do not just make shorts because I can not make a living of this. I work mainly in the advertising industry. And, with Andrea Brusa, my co-director, and Andrea Italia, our producer, we started a small company a few years ago to make short films that we would produce ourselves. The first was completely self-produced; we managed to find some external help as well for the next ones. However, I am also… I studied acting 15 years ago and, since 4 years, I manage a theater school in Milan where I teach interpretation. And so, I do seminars and courses throughout Italy. I am very proud because it is a complementary aspect of the work as a director. When we make short films, Andrea is more concerned with scriptwriting and the visual aspect, and together we manage the actors’ interpretation.

Fannie: How does the work and knowledge of the theater environment influence your work as a director?

Marco: In my opinion, it is fundamental for the actors to study a little the director’s work and for the director to study acting a little, because they are not two separate professions. The actors and the director are confronted with the same questions. How to create a better character? For the actor, it is useful to know a little about the techniques to understand the director’s requests. An actor who has no idea of how editing works, how cinema works… At the theater, it can work, but there are things and times to be respected in cinema. Conversely, a director who has never studied interpretation speaks to actors with adjectives: “be agitated for this scene”. But if you talk to an actor with adjectives, you will get clichés. We get much better results if we explain to the actor what happened before and therefore if we do not only speak with adjectives. So, these are two communicating vessels.

Fannie: So you’ve been working with Andrea Brusa for 5 years?

Fannie: 7, really! Because I did some research and I only found another one …

Marco: It’s because the first ones were not very good! (Laughs) So, Respiro yes, Magic Alps, and I’ve finished one recently called Muro bianco. We finished editing two months ago. We will register for festivals soon. Andrea has also started writing a feature film, but our self-production system does not work for a feature film, because it costs too much, so we’re looking for funding.

Fannie: I saw that Respiro also deals with recent immigration in Europe. How did you decide to deal with this theme?

Marco: So… We like to talk about the news. Then, in Italy, it is a particularly sensitive issue because Italy has an important geographical position from this point of view. And often, this problem, this issue, is approached on television or in the media in a very white or black way. Are you for or are you against? It’s a lot more complex than that. 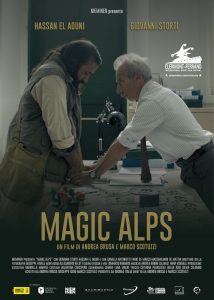 So, on the one hand, we are interested by the news: to tell a story in depth, whether for Respiro or Magic Alps. On the other hand, we were interested to tell the story of ordinary people, hidden stories, little known stories, people who make choices larger than themselves. And their relationship with these choices makes us discover new or different things about them. Faced with these choices, these people are capable of great things. With the phenomenon of immigration, there are often people who are ready to do anything to change their lives, whether negative or positive. In Magic Alps, the protagonist, the director of the reception center, a person who seems very cold, finally shows human solidarity when he meets this immigrant with his goat, and even tries to skirt the laws a bit.

Fannie: So, it’s the story of this immigrant with his goat that gave you the idea to make a movie or you were already looking for this type of story?

Marco: First, we were looking for stories in which ordinary people are confronted with things bigger than themselves. Then, we found the story of this goat, a real story that succeeded in 2011, a news that was almost ignored. I do not want to give the punch, but the end of the real story is tragic. So, the whole story told in the film is true, but the end is our invention. We wanted to finish in a sweeter way.

Fannie: What is your writing process? Have you done any research to find out how the relationship between immigrants and the Italian authorities was going on?

Marco: Yes yes yes! Because the actor who plays the main character, Hassan El Aouni, is a guy who studied at the theater school where I teach. And I’m very happy about that because he is very good. And the other character, the director of the center, is Giovanni Storti, a well-known actor in Italy, a comic actor who is part of the trio Aldo, Giovanni and Giacomo. A very popular trio in Italy. So, we put Hassan, who studied drama and plays for only a year together with this actor who is playing for 30 years. And he was very good. And Hassan, to earn his living, works for Milan’s Immigrant Reception Center as an educator. He is Moroccan and Italian. He works for immigrants who come to Italy and he knows so many stories. And his wife, Zena [Zena Abram], who is Syrian, is the main character of Respiro. And she also works for the Immigrant Reception Center in Milan. So, this couple knows well the relationship between immigrants and the Italian authorities. And also the practices of immigrants to divert the attention of the authorities.

Fannie: So, the script is written first in Italian and then translated into Arabic and English? How was it to shoot in three languages ​​at once?

Marco: The screenplay is in Italian and then, Hassan, who knows Arabic well, and his wife Zena, helped us to translate it. It’s in Arabic when the protagonist addresses his goat because it’s their language.

Fannie: It helps a lot to have people in your group who speak both Italian and Arabic…

Marco: Yes, it’s fundamental! And then, there are several dialects… The protagonist of Magic Alps is Afghan. And in Afghanistan, we speak Farsi, a language a little different. In the end, we decided to do it in Arabic, because it is a more international language.

Fannie: And it’s not a problem for a director not to understand what the actors say when shooting?

Marco: I can not know if they said the right thing! (laughs) In fact, yes. Because when we showed it to different Arabic people, they told us that it was the good replies. However, as I often say as well for theater, it’s much more important “how do you say” a reply rather than “what you say”. For example, “How are you?”, There are 50 ways to say it. We must be much more attentive to the use of the voice, the movement of the body, the look, rather than the reply itself.

Fannie: What will be the themes in Muro Bianco and in your next feature film?

Marco: Muro Bianco tells the story of the first Italian elementary school where asbestos was found in the walls. And so, the children almost went there with masks and astronaut clothes because they could not interact with the walls. And the Italian state, rather than move the children to another school, created a perimeter of security in classrooms… And, I do not give you the punch, but the people, who did not have good relationships before, collaborated and developed solidarity to help children. Again, this story is used to show that people are led to do things bigger than themselves when they face a bigger problem.

Fannie: How did you get that idea?

Marco: I must say that Andrea is really great to find fantastic stories to tell! We did a ton of research, in TV shows in particular… There is a show in Italy called Le Iene, about the news, which offers sometimes really interesting stuff.

Fannie: So this story is also inspired by a real fact?

Marco: Not as much as Magic Alps, because almost everything in Magic Alps was based on the real world. But we saw some stories that allowed us to imagine that one. There is not a true story behind this film.

Fannie: Why is the Magic Alps title in English?

Marco: We have thought about it for a long time. In fact, since it affects people in the Middle East, Afghanistan, where there are many shepherds who do not necessarily have TV, we thought that the word “Alps” would probably be more familiar, that it would have already come to their ears, more than “Alpi”. We liked that the protagonist could think of joining, abroad, a place that reminds him of his home. And when faced with a long journey, where he knows a few words in English that allow him to communicate with the various stakeholders, it was said that knowing the place of destination in English was plausible, more than in Italian. English is a more universal language. And this discussion comes in large part due to the fact that I’m working with Andrea. It is very productive. We think with two heads. It’s very stimulating.

Fannie: It’s always useful to think with someone else!

Marco: Yes, unless you are a genius! Andrea and I are not two geniuses! (Laughs) Like Xavier Dolan for example… He makes the music, the script, the direction. He has a crazy talent! His latest film, La mia vita insieme to John F. Donovan, did not really please me; there were beautiful things, but it’s not his best film. But hey, he does everything!

Fannie: I have not seen it yet! [At the time of the interview, in July 2019.] And it’s true he does so many things and so many movies at once.

Fannie: So Dolan’s movies are translated into Italian?

Marco: Yes. I think since Mommy.

Fannie: Are there other directors that you really like?

Marco: Yes, because Andrea and I studied cinema. I did my thesis on Jim Jarmusch. A director who I like a lot because he manages to talk about dramas with lightness. It’s a bit like what we tried to do with Magic Alps. But his work is a bit heavier, but still. It’s something that inspires me a lot.

To see how the story of this Afghan refugee and his goat is treated with sensitivity and gentleness by Marco Scotuzzi and Andrea Brusa, watch Magic Alps here, on Le Petit Septième, during Italy in Short! From October 4th to 6th.

By Fannie Caron-Roy
On 2 October 2019
Interviews