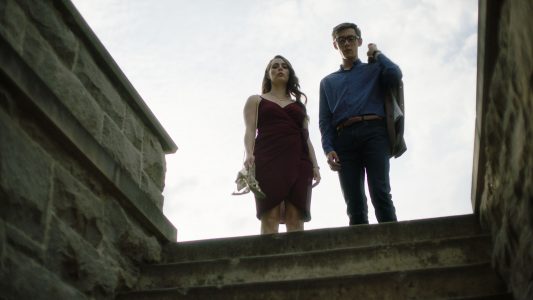 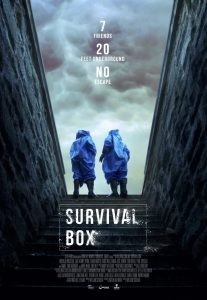 High school is finally over. Brothers Josh and Ben, looking forward to their bright futures, throw a party in their family’s survival bunker for their classmates. Things take a nuclear turn when war is declared and Josh, Ben, Camila, Saundra, Travis, Kit and Scott are trapped in the bunker. Attempts to communicate with the outside world are futile and supplies start to dwindle. The world may have ended outside, but the tension is just getting started underground.

Survival Box, by William Scoular, tells the story of a handful of high school students trapped in the bunker of a wealthy Philadelphia family. The question remains… Did Donald Trump and Kim Jung Un press the button?

A lack of blatant realism

From the foreground of Survival Box, we know that the evening will be long… A fairly ordinary actor launches cliché phrases to other ordinary actors.

But it’s not the worst, actually. It spoils even more once the bunker is sealed. After a mini panic, the 7 protagonists begin to live… simply. Scott decides to leave to see what’s going on outside. Finally, it will improve! Well, no… It’s even worse. Time flies faster and faster as large white surtitles on a black background tell us the number of days our friends spent inside the shelter. But, strangely, no situation seems to create conflicts. As we see, to live in a closed place, with 5 other people, for several weeks, can bring to the perfect happiness.

It must be said that there seems to be nothing missing in this sublime palace. Oh… Sorry, this is a bunker. But a bunker where there is even a book on abortion. Oh yes, and an exerciser to run. You know, just to burn the limited amount of oxygen they have a little faster… They even have food that seems quite normal, with a stove and oven for cooking.

Now, Spoiler alert. So, if you want, you can go to the next paragraph. One of the women in the group is pregnant and she will give birth in the building. Unfortunately for her, she will die in childbirth. This will not prevent the baby from surviving for several weeks. A baby child survives for several weeks, without access to breast milk or a milk substitute… WOW! I would like to know how it works. Besides, they do not have any diapers either. I would like to know what they did with the baby’s feces. Because I do have 2 babies. And at the beginning, a baby stains about ten diapers a day. No diaper, ok. But tell me what you do with poop and pee. And how can this damn baby eat?!?

A theme more and more present

In January 2017, the Bulletin of Atomic Scientists advanced the clock of our death, bringing us closer to the end of the world. In the background, on television, on the radio and in the newspapers, two world leaders who have full access to mass destruction weapons organized a public debate about the power of their nuclear arsenals, while doing the kind of statements that could trigger a nuclear war.

It is with this theme, starring the great Donald and his best friend Kim Jung Un, that the film begins. The theme of the younger generation, struggling with the shitty decisions of previous ones, is increasingly present in the cinema. One can think to, among others, L’heure de la sortie which will be released on August 16, 2019. And it is a bet that films on the end of the world will multiply in the years to come. But the difference between these films and the end-of-the-world films of the past years is important. The new ones are no longer science fiction films, but social dramas or thrillers rooted in the real world, with real stakes. 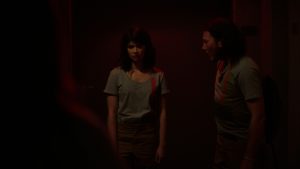 There are only two scenes in Survival Box’s script – at the very beginning and at the very end – where the main characters are shown in the open air. We guess that this choice should serve to create a sense of confinement for the viewer. Yes, we guess. Because this is really not the case. The psychological and complex impact that such circumstances should have on the characters is not perceptible at all. So, we do not believe it, absolutely not.

Survival Box is a metaphor for the troubled times in which we live. Perhaps it will maybe, with the others to come, help people think about the most urgent existential threat of humanity: nuclear weapons (and those who control them) and climate change.