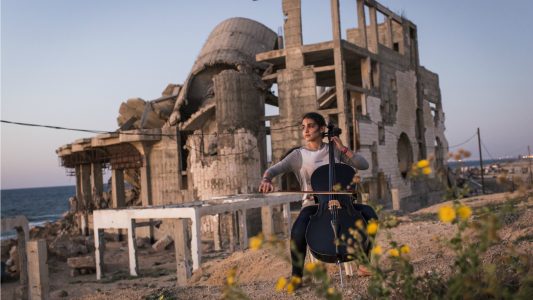 Gaza – How Many Lives? 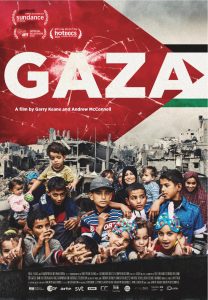 Gaza takes us to a unique place beyond news reporting. The documentary reveals a world full of resilient and eloquent characters. It offers a rich cinematographic portrait of the teachings of these people who manage to make sense of their lives in the rubble of permanent conflict.

With Gaza, Garry Keane and Andrew McConnell are trying to shed light on the real situation in the Gaza Strip. They offer a movie that is easy of access, simple and disturbing.

How many lives destroyed?

“Every night when Karma and my other daughters are asleep, I sit by their bedside and stroke their hair. I wonder if it was fair of me to give birth to them here.” – Manal

Ever wondered if making a baby was a selfish gesture? In our present world, where our planet is dying and our race may be dying out, it is already unfair. Imagine if, in addition, your descendants really have no chance of having an acceptable life. This is the kind of life that can be expected when living in Gaza. And there is no question of immigrating to find a better life. No. This country that sees half of its borders along the sea is an open prison. A country that lets you believe in the freedom possible… an unattainable possibility.

In Gaza, one does not wonder if a war could happen. One wonders instead “when” it will start again. Since the 1940s, every generation has experienced war. And, often, more than once. How is it that a 16-year-old has seen 3 wars? But it is not only this sad reality that the documentary shows us. It’s also how people deal with it. How they overcome it…

Manal Khalafawi has worked as a project manager at UNDP (United Nations Development Program) for the past 25 years. She is married and has four daughters and a son. Her family roots are in Jerusalem, but she was born and raised in Gaza. She fondly remembers the time when Gaza was a cosmopolitan place full of life and hope. Today, she questions and constantly worries about the safety of her children.

The youngest of Manal’s children is Karma Khaial. She is 19 years old and studying law at Al-Azhar University in Gaza. She would like to get a scholarship to do a master’s degree in international law or political science abroad, but she sees that the chances of that happening are very slim. All her youth, Karma’s passion was cello and she was hoping to get to a professional level. However, she has not even been able to practice for a few years because it reminds her too much of war and conflict.

She and Ahmed Abu Alqoraan both live by the sea, but that’s probably the only thing they have in common. Even though they share the same 40 km of Mediterranean coastline, their lives are poles apart. Ahmed lives in Deir Al-Balah, 10 km south of Karma’s building. Deir Al-Balah is the smallest refugee camp in Gaza and is home to 21,000 refugees who fled villages in central and southern Palestine following the Arab-Israeli War of 1948. It is located on the Mediterranean coast, and houses Ahmed with his 13 brothers and 23 sisters, as well as Ahmed’s father and his three wives. They are the largest family in Gaza.

Ahmed, 18, is uneducated and, unlike Karma, he is not looking beyond Gaza for his life goals. While Karma watches the sea, lamenting the inaccessible opportunities, Ahmed sees in the 5 km of restricted water (which Israel leaves to the Palestinians) the source of his family income. Ahmed’s family is fishing to survive, but is struggling. Despite everything, Ahmed dreams of owning a big boat and fishing on a large scale. He understands the difficulties of realizing his dream and he knows that education and hard work are the only roads to success.

Then, there will be the war of 2018, towards the end of the film. Filmed on the spot. Dead men… Dead women… And children…

Honestly, this is a very hard 15 minutes to watch. It’s frustrating. It’s horrifying. It is unbearable. It’s reality.

Gaza is a unique and dynamic land, rich in culture and history, home to an oppressed and dehumanized people, but also resilient and strong, who want nothing more than to live a normal life. And peace. This is what this documentary tells us.

It is striking to see that people continue to smile, and even to have brief moments of hope. But we quickly understand that it is rather the strings of despair, frustration and fatigue that weave the lives of Palestinians in Gaza.

Gaza will certainly not solve the situation in the Middle East. On the other hand, it will allow the public to look deeper into the issue and understand that life in Gaza is changing cyclically. And that the weight of the past still reduces hope for the future.