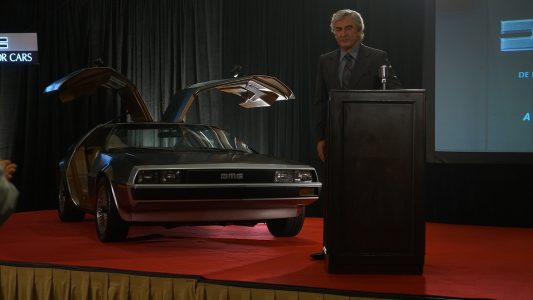 Framing John DeLorean – Back to The Future 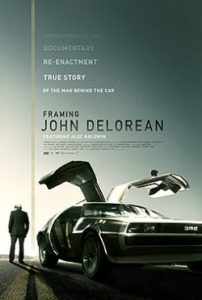 Money, power, politics, drugs, scandal, and fast cars. The incredible story of John DeLorean is the stuff of a Hollywood screenwriter’s dream. But who was the real John DeLorean? To some, he was a renegade visionary who revolutionized the automobile industry. To others, he was the ultimate con man. For the first time, FRAMING JOHN DELOREAN recounts the extraordinary life and legend of the controversial automaker, tracing his meteoric rise through the ranks of General Motors, his obsessive quest to build a sports car that would conquer the world, and his shocking fall from grace on charges of cocaine trafficking.

Interweaving a treasure trove of archival footage with dramatic vignettes starring Alec Baldwin as DeLorean, directors Sheena M. Joyce and Don Argott show a gripping look at a man who gambled everything in his pursuit of the American Dream. But who’s the real John DeLorean? Is there one? And how would you know? Welcome in the fantasy of any screenwriter.

Initially, Sheena M. Joyce and Don Argott were consulted for a documentary (behind-the-scenes) supplement to a feature film about DeLorean’s life. When the biopic collapsed, the filmmakers then strove to create a hybrid between documentary and fiction, unique and irreverent, which includes traditional interviews and archive footage with reenactment of critical episodes of his life staged with actor Alec Baldwin.

I must admit that I was a little lost and uncertain at first. I found that this heteroclite mix gave a style a little “not serious” to the film. But we get used to it and we adapt rather well to this original genre. Then, it’s still quite fun to see the questioning on people’s faces when they see the trailer. It gives something like the reaction of a friend of the director:

DeLorean is the type of person who does not leave anyone indifferent. For some, he was – and still is – a hero, a misunderstood genius. For others, he’s just a scammer who got out of it too often.

It is probably his children who best summarize who he was. As much for Zack than for his sister (Kathryn), their father was their hero, their best friend, the most important person in their life. And at the same time, his son explains that the DeLorean adventure has destroyed all their illusions about their father.

The presence of the DeLorean children in the film is particularly important given the fact that the other speakers are practically all former employees of John Z. So, presenting relatives who still love him brings a counterbalance and credibility to the other testimonials.

Back to the future

Like most people of my generation, Back To the Future was everything I knew about the word “DeLorean”. This futuristic car has, despite the failure it was, a legacy that goes far beyond what his creator could have hoped. The latter is, thanks to that car – at least his name –, immortal.

Ironically, Framing John DeLorean was done in small strokes, forcing directors to jump back in time before returning to work. After starting the behind-the-scenes that was abandoned when the feature film project died, the directorial duo found themselves working on the documentary again after 7 years of delay. But this time, using as a starting point the idea that no one can decipher the real story of John DeLorean.

No one has left their mark on the auto industry as John Z. DeLorean did. An engineer and executive at General Motors from the 1950s, he was responsible for the industry’s success, including classic Pontiac and Chevrolet models, as the youngest divisional director in GM’s history. DeLorean was shown the door in 1973 and took the opportunity to start his own business: DMC. His sports car, the DeLorean, stainless steel built, was a notorious flop, although the model later reached the infamy of pop culture as a time machine in Back to the Future.

But the characteristic that made the man’s success, as well as his fall, was his taste for risk. He was not afraid to dive in if he believed in his idea. And he had a big mouth and an attitude. To give you an idea of the kind of person he was, you could say he was a kind of Elon Musk from the ’70s.

Framing John DeLorean offers an exciting and subversive first look at a mysterious and misunderstood man. A man who, thanks to a film, has reached the status of myth. At least, his name…