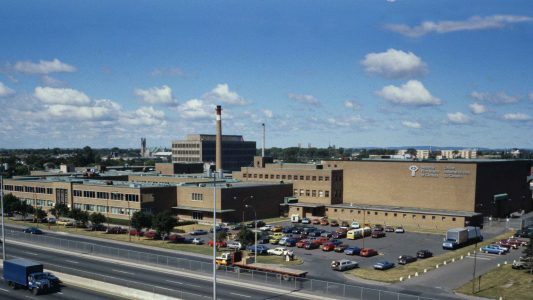 On April 24, The Man Seeing, the mythical logo of the National Film Board of Canada (NFB), will be removed from the facade of the organization’s building at 3155 Côte-de-Liesse, in anticipation of its relocation, next fall, in the space of his future headquarters which will soon be built in the Quartier des spectacles.

Created in 1968 by the graphic designer Georges Beaupré (1937-1986), then artistic director of the NFB, The Man Seeing represents, schematically, a man who joins his two hands above his head, creating an arch and at the same time, the shape of an eye. “Arms raised and hands joined suggest celebration. The head is like the iris of an eye. It’s the man who sees. It is the visionary man, the animated man and perhaps even the man laid bare”, wrote Commissioner Hugo McPherson, July 9, 1970, in a memo addressed to the whole staff and officialising the use of the new logo. Thus, The Man Seeing, a symbol of the importance of vision in our humanity and development, has become the emblem of canadian cinema.

The logo, cast in aluminum in a format of 2.71 meters by 2.59 meters, was installed on the facade of the headquarters of the NFB, a building built between 1953 and 1956 specifically for the needs of the agency. Founded in Ottawa in 1939, its head office moved to Montreal at that time to foster the development of French-language cinema. The installation of the new logo inaugurates the establishment of the NFB in Montreal.

More than sixty years later, since the Côte-de-Liesse building no longer meets the current needs of film production, the NFB decided to relocate in the heart of the Quartier des Spectacles, to the Îlot Balmoral. However, this move is also an opportunity for the organization to become more involved in its mission, as Claude Joli-Coeur, Government Film Commissioner at the cinematography and President of the NFB explains:

The relocation of the NFB’s head office in the fall of 2019 marks a new chapter in the history of the organization. This is a great opportunity to meet audiences, to be where the public is, in an open and accessible place, at the heart of the critical area of creation and dissemination that is the Quartier des spectacles in Montreal. […] the new central office, located in an emblematic building, will be a national and international showcase of local know-how and talent, a space conducive to innovation, a place of gathering and exchange between creators, NFB staff and the public.

The new image of the NFB

Designing the project of the future ONF headquarter, the architecture firm Provencher-Roy, and specifically Eugenio Carelli, aspired to create the new symbol of our cinema in the heart of Montreal. Indeed, the NFB takes advantage of the relocation to replace the conservatism and sobriety of the previous complex with a more original formal research. The architecture, with its innovative style, speaks for itself about the function of the building and the creativity that is at the heart of the organization’s mandate. Proof, once more, that a picture is worth a thousand words…

This proverb proves itself even more if we dwell on The Man Seeing itself. Originally green in color, the logo has been slightly modified twice, the last version dating from 2002. The Man Seeing then frees his rigid frame to symbolize the opening to the next generation. But it’s not the new logo that will be integrated into the Îlot Balmoral headquarters…

Without forgetting our history

The choice to take back the original object designed by Georges Beaupré rather than affixing the newest logo to the new facade is in itself very revealing. Indeed, Beaupre’s The Man Seeing has a particular heritage quality, for more than one reason: it deals at the same time with its own role in the history of cinema, graphic design and the NFB and affirms, by its unique image, the importance of our metropolis as a hub of cinema in North America. Thus, the insertion of the original logo at Îlot Balmoral marks the registration of the new head office in the history of cinema in Montreal and Canada.

Classified as a federal heritage since 1998, the Côte-de-Liesse building will soon be stripped of its flagship symbol, which, by moving to Îlot Balmoral, concretizes the image and function of the place. The architecture of the NFB’s future headquarters announces the opening of canadian cinema to modernity; The Man Seeing  his attachment to his heritage and his history.