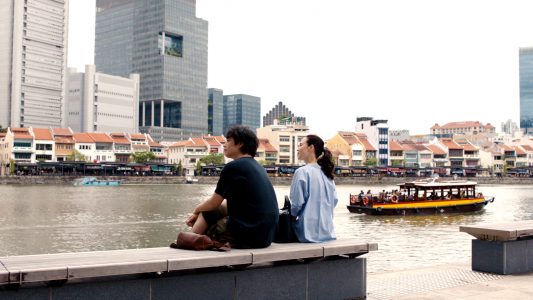 Ramen Shop – From Takasaki to Singapore

“Food is, after language, the most important bearer of cultural identity”.
Ben Rogers 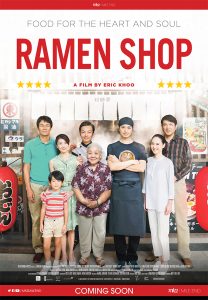 Masato (Takumi Saito), a young Ramen chef, leaves his hometown in Japan to embark on a culinary journey to Singapore to find out the truth about his past. He uncovers a lot more than family secrets and delicious recipes.

With Ramen Shop (Ramen), selected in Berlin in 2018, Eric Khoo offers us a culinary and political journey between Japan and China, between Ramen and Bak Kut Teh.

To talk about what separates the Japanese and Singaporeans, the director decided to go through the culinary arts. He also explained his choice as follows: “I have the feeling that we can […] say that food defines who we are and how we live. In addition, I sincerely believe that cooking can bring people together under any circumstances.”

But before going further, let’s make sure we know the two recipes that characterize these two cultures.

After going back to the origin of the ramen, historians have discovered that this dish actually comes from China. Indeed, this Chinese soup was brought to Japan by Chinese traders in the late nineteenth century. Until 1950, the ramen were called “shina soba” or “Chinese soba”. From now on, the term “ramen” is the most widespread. The dish consists of Chinese noodles served in a meat broth or, more rarely, fish, with soy sauce or miso. On the dish are added slices of pork (cha shu), seaweed leaves (nori) and green onions (negi). Each region of Japan offers its own version: you can taste, for example, pork broth ramen in Kyushu and miso ramen in Hokkaido.

Bak kut teh is a very popular Chinese pork soup in Singapore. There are two varieties: teochew is a pepper and garlic broth in which pork cooks for long hours and the hokkien is a broth stewed with herbs and spices such as garlic, cloves, cinnamon, coriander and fennel. In Singapore, bak kut teh version “teochew” is the most popular. Chinese migrant workers enjoyed starting their day’s work with this inexpensive and comforting dish.

Between English, Japanese and Cantonese

Throughout Ramen Shop, we navigate between English, Japanese and Cantonese. Obviously, with the subtitles (you, you understand these 3 languages?) we do not notice it too much, but this language exchange is incredibly well placed in the film. No, we are not in a Hollywood movie, where all people of all cultures speak English.

Of course, for me, the nuances between Japanese and Cantonese are quite vague. On the other hand, while going in between these 3 languages, the director shows the history of Singapore. It shows that many Japanese live there and that the language seems to be mastered by several local… Moreover, the Second World War has left traces and, still today, some older people cultivate a hatred towards Japan and its inhabitants. These people are represented by the character of Mrs. Lee.

Masato was born from a Japanese father and a Singaporean mother. He goes back to Japan when his mother dies, but his father does not tell him about this mother, whom he has only known very little about. Despite the love of his father (a cold love that tends to be associated with the Japanese), Masato has been suffering in silence for years. It was only after his father’s death that he decided to go on a trip to find out the truth about his mother’s past and to discover a whole part of the story of his family that he did not know of.

Among the things he did not know, there are 50 years of diplomatic relations between Japan and Singapore. It is this difficult relationship between the two countries that is at the center of Masato’s family mystery. And what a good idea to use the food to address this theme.

It would be difficult to detail how Khoo does it without revealing punches. But this choice makes it easy to understand the political situation between the two countries.

The themes of acceptance, forgiveness and reconciliation are very much in the film: “I want to celebrate relationships, not only between human beings but also between people and food.”

Ramen Shop reminds us that cooking, beyond our primary need to feed us, comforts us, unites us and fills our souls.