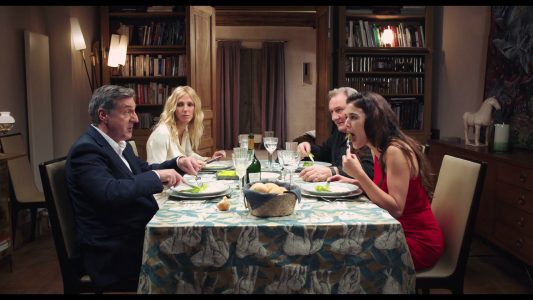 – But I can not understand how he could leave Laurence, who is an extraordinary woman for this 30 year old girl!
– It’s very easy to understand, though…
– Excuse me, what did you say?
– Me? Nothing, nothing… 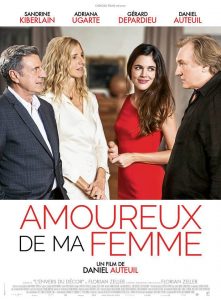 Daniel (Daniel Auteuil) is very in love with his wife (Sandrine Kiberlain), but he has a lot of imagination and a best friend sometimes cumbersome (Gerard Depardieu). When he insists on a dinner “between couples” to present his brand new, and very beautiful, girlfriend (Adriana Ugarte), Daniel finds himself stuck between his wife who knows him by heart and dreams that surprise him.

With Amoureux de ma femme, Daniel Auteuil comes out of the work of Pagnol to adapt to the cinema a play. He took the opportunity to reunite with Depardieu to create a film that takes us between fantasy and reality.

The concept of Amoureux de ma femme is based on the idea of “What if …”. What would have happened if? So, from the arrival of Patrick and Emma, we walk between the reality of this uneasy evening, and the fantasies of Daniel. The concept is fun. But maybe a little overused.

In reality, this coming and going between fantasy and reality has only one goal: “to praise the dream that envelops in bright colors the gray of our lives.” Who has never been caught up in the game of daydreaming? Here is the presence of this young woman, beautiful and sexy, but free and assumed that brings Daniel to question his life.

Not obvious the friendship between couples when one of the two couples breaks. Especially when the two women are “best friends” and the two men are longtime friends. Let’s say that the situation quickly becomes dangerous for the intact couple. Obviously, Isabelle (Kiberlain) wants to defend her friend who was “dumped” for another, while Daniel wants to support the newly found happiness of his friend.

Auteuil took the opportunity to add some misunderstandings, some unsaid and a dose of hormones to create a quite effective light comedy. Oh yes… We must not forget that the beautiful Emma is 20 years younger than the woman she “replaces”. That also increases the temperature…

As the director explains, “There is in the character of Daniel the audacity to trade his habits for a new future, the promise of a change of life always possible that we have not been able to transform, an ambition that we have not dared to accomplish. Especially since his old friend dared. The question now is, which of the two men was right? And above all, what will Daniel do?

But basically, Amoureux de ma femme is only saying a big truth: to dream makes us realize that we have only one life to live while we have the appetite for a thousand.