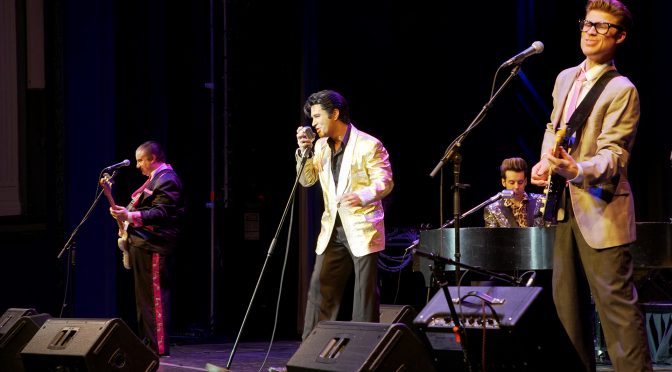 « One’s originality comes from the inability to emulate your influences. »
John Lennon

On a road trip through an alternate universe, where Elvis Presley and Jackie Wilson never died, Almost Almost Famous explores the lives of three of the world’s top tribute artists, the cost of borrowed fame and the risk of getting ‘lost in the act’.

Barry Lank’s documentary takes us all over America to help us live and discover this world of tribute performances. This kind of show that works because, let’s face it, having Elvis, The Big Bopper, Buddy Holly, Jerry Lee Lewis and Jackie Wilson on the same stage, at the same time, it’s something!

Basically, Almost Almost Famous is the story of 6 men: Lance Lipinsky is Jerry Lee Lewis; Ted Torres is Elvis Presley; Bobby Brooks is Jackie Wilson; Jeff Giles is Buddy Holly; Bill Culp is The Big Bopper; Marty Kramer is the tour manager. But especially the story of 3 of them.

Lance Lapinski is from Texas. Since little, he imitates Elvis. He dreams of becoming famous as an artist. But the reality and the need to subsist, leads him to perform tributes. He, therefore, agrees to launch himself as Elvis. But they already have one… Why not Buddy Holly? They have one too… So it will be Jerry Lee Lewis. And he is bigger than life. An incredible talent. And a completely crazy pianist. But also the character and temperament that often comes with this type of artist.

Ted Torres grew up in Florida. His idol? No other than Elvis Presley. And Interpreting his idol fully satisfies him. But until when will he be able to afford it? Elvis died in his forties. He would not want to look as ridiculous as those men 50 and over who persist in interpreting the King.

Bobby Brooks grew up in North Carolina. He is from a broken family and has already dreamed of being recognized as himself. But now he’s playing Jackie Wilson, sort of the Elvis of Rhythm and Blues. But his performances will lead him to a much deeper questioning when the family of the one he honors each evening will ask to see him because, the daughter of the late singer does not want any bozo to imitates his father.

What this movie demonstrates

One of the artists asks a question that allowed me to become aware of the “why” of these tributes. He explains that these artists were – and are – monuments. And he continues with this phrase that explains everything: Who will remember Katy Perry’s hits in 50 years?

Indeed. Elvis, like Big Bopper and the others, are still heard and admired today. And they will probably be again in 20 years, even 50 years. They all, in their own way, revolutionized music.

But Almost Almost Famous takes us behind the scenes of what is a tour with several artists. As the tour manager explains, each of them is used to having the spotlights on him. But in this kind of show, they must, in turn, give the front of the stage to another. And it is the young Lapinski who seems to have the most difficulty with this notion. Perhaps because he is the youngest and still dreams of becoming a star for what he is, not because he is a sublime Jerry Lee Lewis.

At times, this film looks a bit like a reality show. I’m not talking about the depth and the interest. We are still somewhere else. But at times, we end up in confidences (read bitchin’) that we would imagine better in a love finding show or in Survivor. It is probably Kramer who lets himself go with those words that are frankly lacking tact. Let’s say he’s not going easy on some of his protégés.

In the end, Almost Almost Famous makes us travel across America in the tour bus of a talented group of artists. Not sure, moreover, this life is for everyone. Glory comes at a price. It remains to be seen what is the price of everyone…