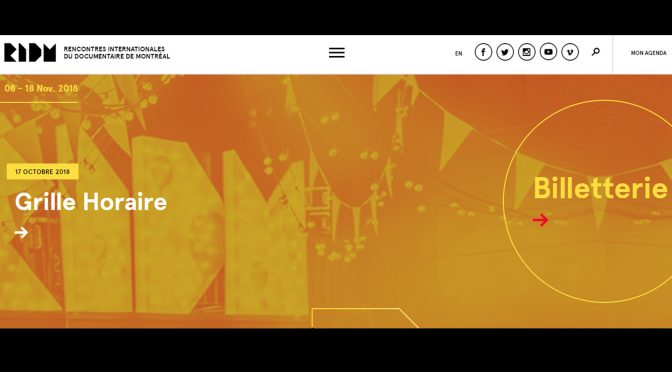 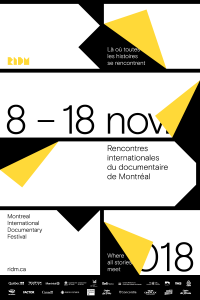 The 21st edition of the Montreal International Documentary Festival (RIDM) is about to begin. From November 8th to 18th, you will have the chance to see a selection of 157 movies – including 25 world premieres, 17 North-American premieres, 30 canadian premieres and 51 Quebec premieres – from 47 countries, without forgetting a few other activities.

The RIDM’s mission: to democratize and promote documentary auteur cinema.

What does the 2018 program have in store for us?

The festival opens with What Walaa Wants, from the Canadian filmmaker Christy Garland. It is the portrayal of a young Palestinian woman with strong temperament, as well as the daily and family tensions at work in this Middle Eastern society. As for the closing film, it is John McEnroe: In the Realm of Perfection, a film-essay by Julien Faraut, narrated by Mathieu Amalric, who reinvents the sports documentary while trying to reveal the essence of an atypical sportsman who is allergic to cameras.

Numerous movies catched our attention for various reasons. At Petit Septième, we promise ourselves to see many of them. That is the beauty of covering a festival as a team. We must say that short films and documentaries hold a special place in our hearts. 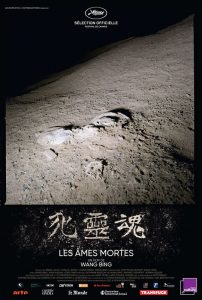 In that sense, François set himself a challenge. He will cover Wang Bing’s Dead Souls about survivors of Chinese re-education camps. The particularity of this film lies partly in its duration. It is truly a river-film; it lasts a little over 8 hours. You read correctly, yes, yes, 8 hours.

We will also see Beautiful Things by Federico Biasin and Giorgio Ferrero. Presented as an audiovisual symphony, carried by spectacular images and an enchanting soundtrack, it portrays the origin of everyday objects and the workers who shape them. The film Young Solitude, by Claire Simon and Nicolas Philibert, shows another aspect of everyday life, this time by filming, in a high school in the Paris suburbs, small moments where students take advantage of a spare moment in their school timetable to discuss two, three or four, on a bench or by a wall.

Other more political documentaries catched our attention. The filmmaker and activist Astra Taylor is interested in the very foundations of the democratic system in What Is Democracy? With the screening, a panel will bring together a group of experts for a thorough examination of the current crisis of democracy. This could be a very interesting meeting. In a completely different order of ideas, in Antígona, Pedro González Rubio examines the relationship between theater and politics through the Antigone play. 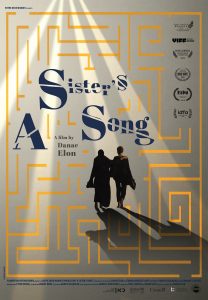 In A Sister’s Song, Danae Elon – whose previous films: P.S. Jerusalem and The Patriarch’s Room we liked – dwells on the complex relationship between two sisters, one of whom decided to live in a monastery.

This is only a small sample of what we will talk about.

The RIDM hosts many activities in conjunction with their movie programming. These “intersections” (workshops, discussions, special screenings, etc.) are part of the 11 days of the festival.

And, as usual, I will now draw your attention to family activities. Two family sessions are offered to introduce the youngest to the documentary. Each session will be followed by an educational and creative workshop.

This year again, the RIDM teams up with Queer Media for a special session featuring a selection of archive videos from 1990, made by women and people from the LGBTQ2S+ community.